At Home with Wood 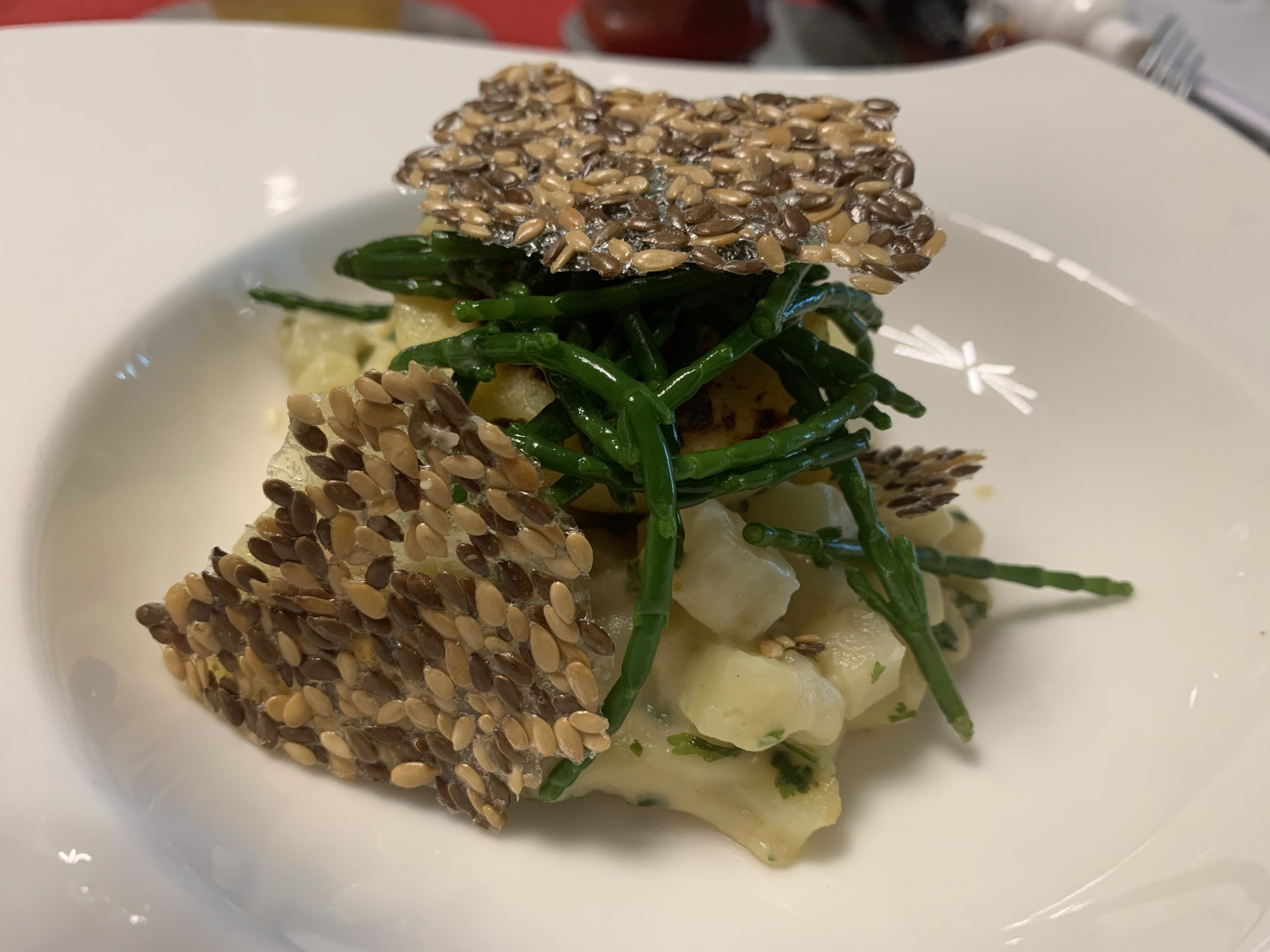 WOOD is a restaurant in Manchester run by Simon Wood, winner of Masterchef 2016. During lockdown Simon has been very busy sharing lots of recipes on his social media and now he has set up a delivery service where restaurant standard meals are part prepared for you, delivered to your door, and all you need to do is finish them off and eat. Unfortunately due to where Neil and I live, we often fall outside the delivery radius for Manchester based restaurants. Fortunately WOOD was different so we decided to book a delivery for last weekend’s lockdown entertainment.

There is a limited choice on the menu but it all sounds delicious. For ease we decided to make sure we both chose the same things on the menu, opting for artichoke, celeriac and apple risotto with crumbly lancashire cheese gnocchi to start, cod with cauliflower cheese and parmesan crumb for main and then Simon’s famous tutti frutti dessert which he made in the Masterchef final. Unfortunately when placing the order I didn’t quite realise how much work I would need to do to finish the meal off, I wasn’t expecting to have to make the posset for the dessert. I thought it would come made. However on reading the instructions I realised there would be a couple of steps, including boiling the tutti frutti mixture and then leaving it to set. Boiling cream and sugar is something I’ve never done and made me a little apprehensive, however its good to push yourself out of your comfort zone sometimes.

One of the nice things about the process was that Simon uploaded all the cooking instructions in a PDF online which meant I could access them and read them with ease. However the instructions at times were a little vague and confusing. For making the tutti frutti posset it lists each item you get; posset mix, grapefruit gel, meringue and tuille. The instructions then say ‘boil cream and sugar in pan then add lemon juice and pour in to desired bowls‘, there was no mention of the grapefruit gel. The items come in little pots but these aren’t labelled, so both myself and Neil got a bit confused. As a result we ended up adding the grapefruit gel to the posset mix before boiling, which I don’t think we were meant to do. I now understand that the posset mix must have been the cream and sugar, but I panicked under pressure at the time. I was at least able to identify all the elements even though they weren’t labelled and add the lemon juice at the right time. I was really nervous about boiling cream as it can go too far very quickly. Both Neil and I were keeping a very close eye on it and thankfully caught it just in time, but I’m not convinced I did it right. We then divided it up and left it to hopefully set in the fridge for 90 minutes.

The rest of the meal was pretty straight forward and self explanatory. Warm the artichoke, celeriac and apple risotto and fry the gnocchi. The starter was my favourite course. The risotto was delicious and it was the easiest to follow. For the main we had to cook the cod by frying it until the internal temperature reached 63 degrees. I decided to scrap this and just roast it in the oven as I was more comfortable with this method. I then had to warm the cauliflower cheese puree, which tasted amazing by the way, even cold as I didn’t quite warm it enough, and sauté the cauliflower florets, which was straight forward enough.

For each course Simon had provided a picture on how to plate up. Obviously this was not a step I could partake in as I couldn’t see the picture and there were no written descriptions on what to do. Neil was not able to see the pictures in clear enough detail to help me so we just did our own thing. Making food look good is not my strength anyway, I would prefer it to just taste great.

When the time came to eat the dessert I anxiously went to the fridge to see if the posset had set. All evening I had been avoiding the urge to keep   checking on it, having visions of finding it still runny or worse, lumpy. Thankfully when I did go take a look, the top appeared to have set solid. I felt quite proud of myself. Unfortunately it became apparent when sticking my spoon in that it really wasn’t all that set and below the surface was still very liquid. Thankfully though it did still taste great at least.

I can safely say our version of the 3 course meal was nowhere near as good as what we would have received if we had gone to WOOD itself, but it was something different to do during lockdown and pushed me out of my comfort zone. It is probably not something I will look to repeat while we are still socially distancing ourselves, but I look forward to being able to go back to WOOD restaurant when it is able to reopen. In fact we already have vouchers lined up for a return visit. If you are looking for something different to do as a couple for a date night idea then I definitely recommend giving it a try. Just be prepared that things might get a little stressful at times. They certainly did get a little heated with us over the posset, but all turned out fine in the end. If you want to create a more authentic WOOD experience, make sure you are listening to some good rock music like the Foo Fighters, as that is the kind of music played at the restaurant. Probably why Neil and I like it there. What I will say is that if you have as big an appetite as we do, then you might want to eat something extra, the portion sizes aren’t the biggest.

Thank you for reading and remember to stay safe.

Filed Under: In The Kitchen
At Home Chocolate Tasting with the Highland Chocolatier
Cookbooks I Would Love to Access