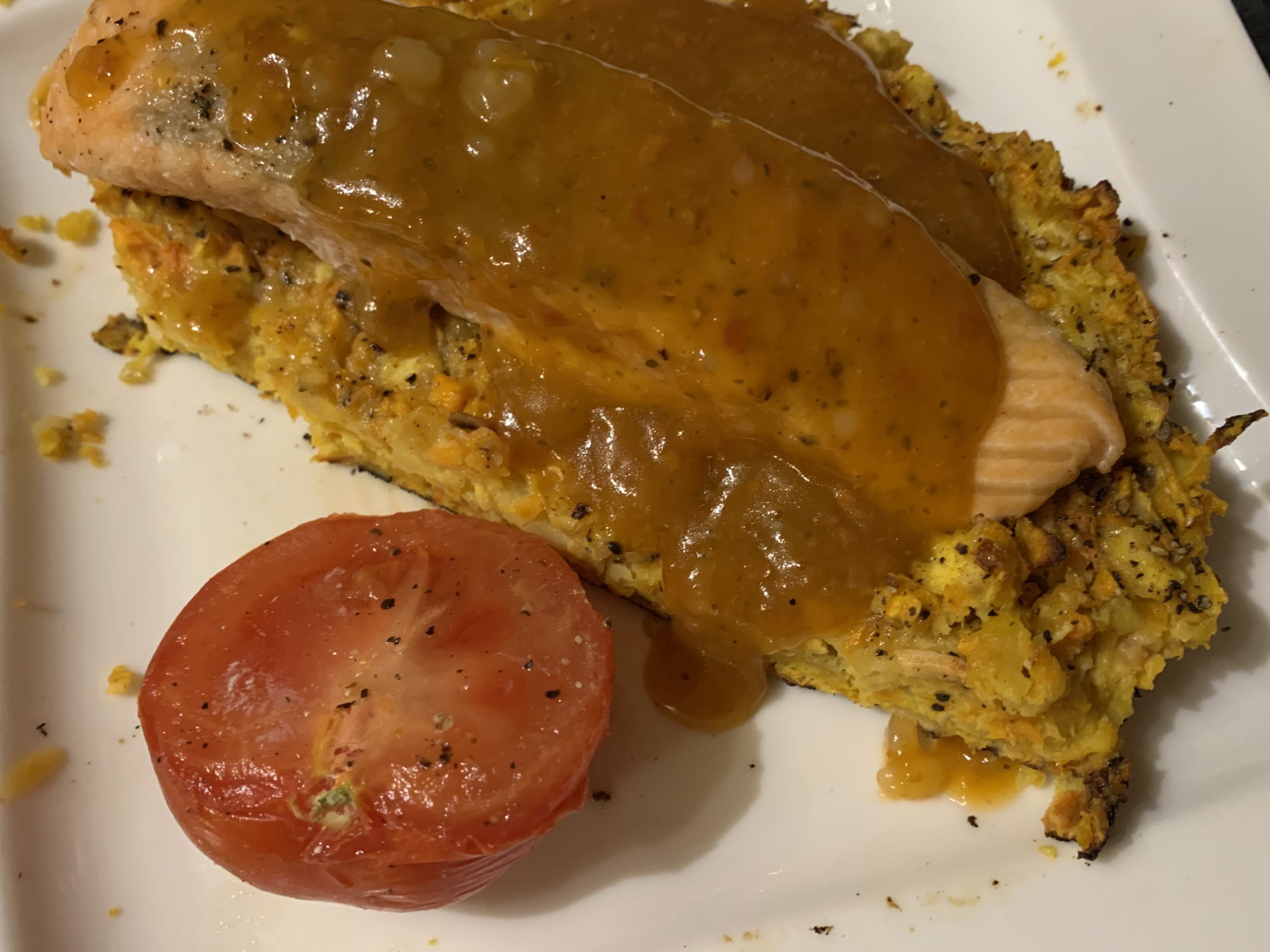 For the majority of my blog posts, I focus on how I successfully do things. This one is a little bit different. Sometimes things don’t quite go to plan or work out how you imagine them to and you have to think on your feet to salvage the mess you have created. This happened to me last week when I attempted to make root vegetable rosti’s, following a recipe I came across on Tesco Real Food. The only change I planned to make was to use sweet potato instead of standard potato as I prefer it. Unfortunately it didn’t quite go to plan, but I think I just about managed to save it from being a complete disaster. So I thought it would be good to share my experience with you to show that cooking doesn’t always have to be perfect and it’s ok to make a mess of it sometimes.

A rosti is a flat, round disc of grated potato, a bit like a potato pancake. They often also contain cheese and are topped with bacon and eggs. Myself and Neil had them for the first time when in Switzerland on holiday a few years ago and really liked them. I saw this recipe and thought that looks like a simple and healthy version of what is a delicious meal, I would love to try making that. So I did.

Firstly the recipe calls for the carrot, parsnip and potato to be grated, so I blitzed everything in my Vitamix to save time. I did the same with the onion and garlic. This all seemed to go well. Next I needed to squeeze out any excess moisture, which I tried to do but I didn’t seem to get much out. This is possibly where I first went wrong as maybe the mixture ended up being too wet at the end.

The recipe then called for 1 egg to be lightly beaten, before being added to the vegetable mixture along with the flour and any seasoning. I did this and thought, yes its all going to plan. I then went to start scooping out dollops of the mixture to shape in to patties or rosti’s, but unfortunately it really wasn’t happening. Every time I took a handful of the mixture, it just fell apart straight back in to the bowl. It was completely unmouldable.

I took a minute to think what I could do to try and make the mixture bind together and decided to try adding another egg as I know that this is what egg is often used for. Unfortunately this did not work and just made things worse. So I decided to try adding a little extra flour to see if this would thicken the mixture up and make it more sticky. This did not work either. I was faced with a big bowl of sloppy grated vegetables that just wasn’t behaving how it was supposed to do.

I hate waisting food and so binning it and starting again from scratch was never an option, but I now needed to think how I could salvage this mess. Especially as I had already managed to waist some of it all over the side and my hands. Then I had a thought…I could try and make one massive one, a bit like a cross between a rosti, frittata and potato hash. I decided to tip the whole mixture in to a frying pan and start it off on the hob, hope that it starts to set and then transfer it to the oven to bake.

Thankfully, this actually seemed to work and after a few minutes I could feel it starting to set round the edges, so in the oven it went. I now needed to think what to do for the rest of the dish to complete it. The rosti’s were supposed to be served topped with a fish fillet and a poached egg. As I had already used a second egg to try and salvage the mixture, I did not have enough eggs to do a poached egg for the both of us, but I still had the fish, it was skinless salmon. I was a little worried that the finished rosti/hash might be a little on the dry side, so I thought I needed to try and make a sauce to go with it. I had seen in another recipe that I was planning to make at a later date some instructions to make a tangy tomato sauce. It looked pretty simple and I had all the ingredients to make it. I thought this would go quite well with the salmon and so decided to try it.

As things weren’t really going to plan, I was feeling somewhat frazzled and rushing around like an idiot. This is not recommended, but fortunately, this time, it didn’t lead to any accidents. However it did mean I forgot to mix the cornflour with a little bit of cold water to form a paste before adding it to the pan, to thicken the tomato sauce. I added it straight in to the pan with the tomato puree, apple cider vinegar and stock to try and save time. Don’t do this. It meant that the flour didn’t dissolve properly and caused the sauce to go very lumpy.

My final addition to the dish was to add some roasted tomatoes. Thankfully roasting salmon and tomatoes are both things I do regularly and am quite comfortable with, so I did this well at least. It also turns out that I didn’t need to rush so much with making the sauce as the finished rosti/hash could have actually done with an extra 10 minutes more in the oven, but I didn’t realise this until after we had plated it up and tucked in. To serve the sauce we strained it through a sieve to remove the lumps and I was pleasantly surprised that it actually still tasted quite nice.

The overall dish ended up being quite pleasant, so thankfully disaster was averted. I would even consider making it all again. Next time though I would definitely bake the rosti/hash for longer in order for the finished vegetables to be softer and this would also then give me more time to make my sauce properly.

Have you ever had any experiences similar to this when cooking? Were you able to salvage it like myself this time? Or did it completely go wrong? Please share your experiences as we can all learn from them. I would also love to try and make proper rosti’s at some point, but perhaps I need to find a different recipe. If I do I will let you know how I get on.

Filed Under: In The Kitchen
My 3 2020 Kitchen Challenges
Making Pesto