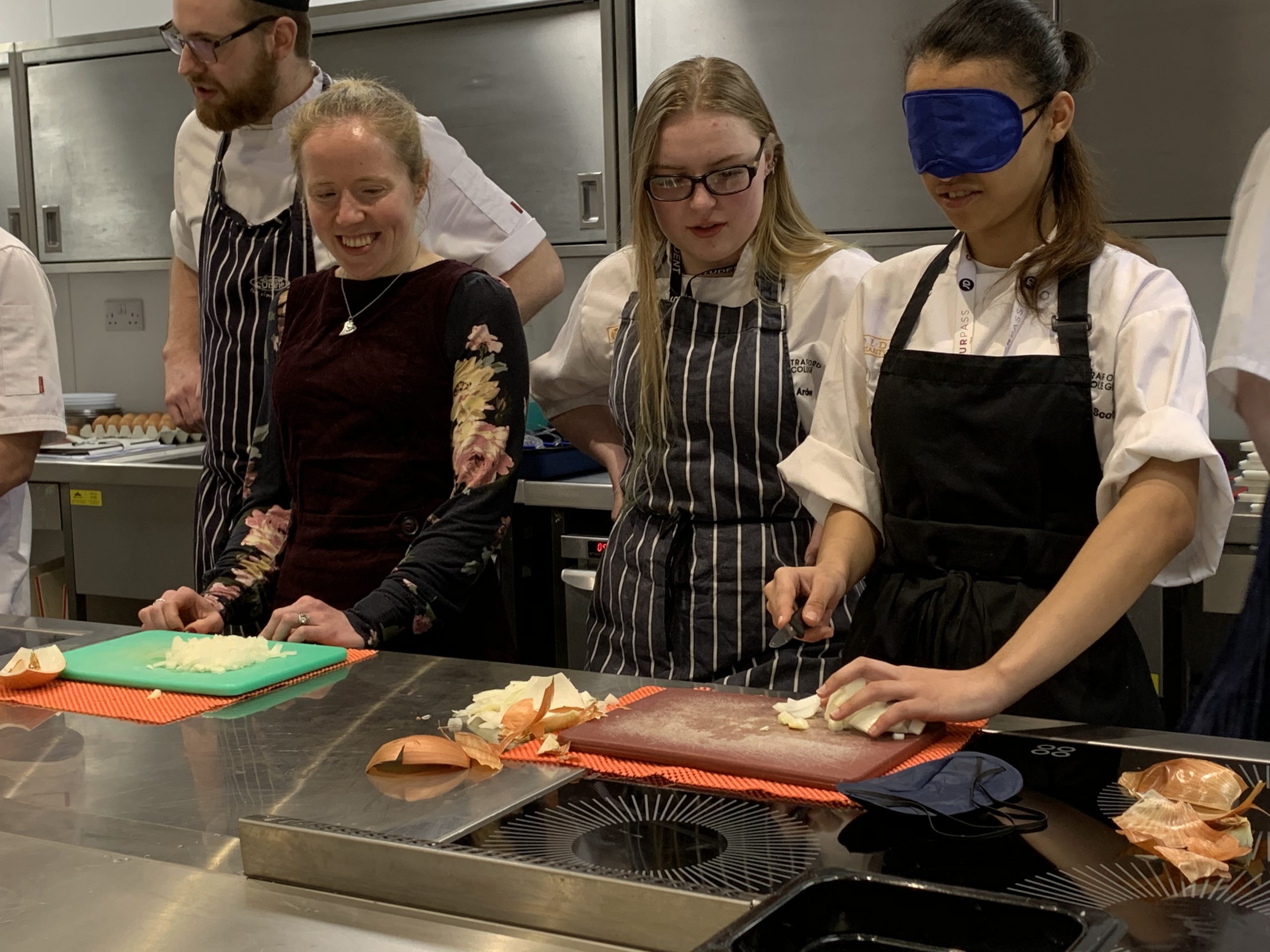 Between getting home from the Track World Championships and going away on our short break to Paris, I did something exciting and new at a local catering college. It all came about when at the start of the year I tweeted asking if any chef’s were interested in taking on a cooking blindfold challenge. I was delighted with how many chefs were interested, including Simon Wood, Adam Reid and Ashley Palmer-Watts, as well as the chef who often cooks for us when away with British Cycling, Alan Murchison. This is something I intend to explore further later in the year but for now another exciting opportunity came from that.

It was suggested I approach some catering colleges about this to see if they were interested, so knowing that Trafford College, which just happens to be round the corner from me, has a very good catering set up, I tweeted them to ask if they would be interested. Within minutes they had replied with a resounding yes. I excitedly began to plan what we could do in the session and arranged to meet with the chef lecturer, Paul Taylor.

The catering college has a restaurant on site for the students to practice and we have often spoke about going, but have not got round to it yet. Catching up to plan the session was a great chance to go down and scope it out. I’m not going to lie, I was a little apprehensive as I’ve never done anything like this before and it had all come about so quick that I hadn’t really had a chance to think about it much. This was probably for the best as if I had, I may have talked myself out of it. Instead I grabbed my amazing opportunity to try something new and ran with it.

When going in to plan the session, Paul showed me round and we identified the best kitchen set-up to use for the session. Often professional kitchens can be quite loud and echoey, which can be very disorientating for people who are being blindfolded for the first time. I wanted the student’s experience to be as fun and enjoyable as possible, so we opted for the smaller and quieter, more modern kitchen area. This did have induction hobs, which I have previously identified as being quite tricky for me to use, but as this was the first session, we decided cooking might be too big a challenge, so this shouldn’t be an issue.

We came up with four different challenges for the students to attempt. Identifying ingredients by smell, identifying ingredients by taste, chopping an onion, and separating an egg. I chose these four tasks because understanding ingredients taste, texture and smell are skills budding chefs should understand. After all it’s these skills that help you put together a complete dish. Chopping an onion is a simple task for most people do and it gave me the opportunity to show off my knife skills. Separating an egg is something i’m not confident in doing myself, so I wanted to see how other people would go about it. I decided that for safety reasons the second two tasks should be completed in pairs, so that there was always someone on hand to provide some guidance.

I also wanted to educate the students a little more about disability awareness so they could take this away with them when potentially considering opening their own restaurants. I took in a variety of glasses designed to simulate 10 different eye conditions, demonstrating that blindness is not black and white. There are so many different eye conditions which affect your sight in many different ways. Being blind doesn’t always mean you can’t see at all, sometimes you can see light, sometimes you can see shapes, sometimes you can see colour. Often it varies and depends on the environment you are in. For the tasks they were blindfolded, but they also had the opportunity to try on the different glasses as well to learn a little more about visual impairment.

On the day itself we spent a little time chatting first. I gave them a brief introduction to who I was, what I had achieved and why I loved food and cooking so much. I then gave them the opportunity to ask some questions before handing out the blindfolds. The spices were placed in small pots and handed round one at a time for everyone to smell, before saying what they each thought it was. The first one was fennel seeds, which most of the students mistook for cumin. I thought this was interesting, especially as cumin would be the last one we smelled. Once the first one was out the way though, the success rate improved. Most of the students correctly identified the majority, including nutmeg, which personally I find hard.

Next it was on to the taste task. Paul had previously chopped up lots of different vegetables for everyone to taste, including carrot, courgette, celeriac and pepper. We even used different coloured peppers to see if they could tell the colour by taste. Red is the sweetest, then orange, yellow and finally green. All of the students were very good at this task, most of them even able to distinguish between pepper colour. I was very impressed.

Now it was time to divide in to pairs for the chopping challenge. I first demonstrated how I do it. Showing them how I use the fingers of my left hand as a guide and cut the onion in half first to allow for a flat stable surface to work from. I must admit, this was the task I was most apprehensive about, as I didn’t want anyone to hurt themselves, but thankfully they didn’t. I was really impressed with how well everyone worked together. The communication between pairings was excellent, providing verbal guidance for the person blindfolded, allowing them to chop safely and effectively. It was really good to see Paul and another student lecturer getting stuck in as well and taking on the challenge.

Finally, it was time to try and separate eggs. This was the trickiest. Only a couple of students achieved it, but needed sighted assistance to inform them that they had. Thankfully this did not dampen the spirits of the group, everyone seemed to really enjoy the experience. I was really impressed in how enthusiastically they approached the session. There was obvious apprehension at the start, but this is normal. Some students were nervous of what we would make them smell or taste, one even suggesting that one of the tastes would be a really hot chilli. I wouldn’t be that cruel on my first time of doing this, but maybe thats something for the future.

Overall I was delighted with how the day went. I’m not going to lie, I was pretty apprehensive. I’m comfortable with talking and presenting in front of people, as I have done it a lot through talks about my sport, but this was different as it was on a new topic. My biggest fear was that when demonstrating chopping an onion, I would cut myself as that would have been really embarrassing, but thankfully this did not happen. It is something I would love to do again to different groups of students or even as part of a team building exercise. If this is something you would be interested in making happen, then please don’t hesitate to get in touch. Off the back of this, I have been invited down to the restaurant at Trafford College called Aspire to be cooked for by the students I did the session with. This is tonight and I am very much looking forward to it.