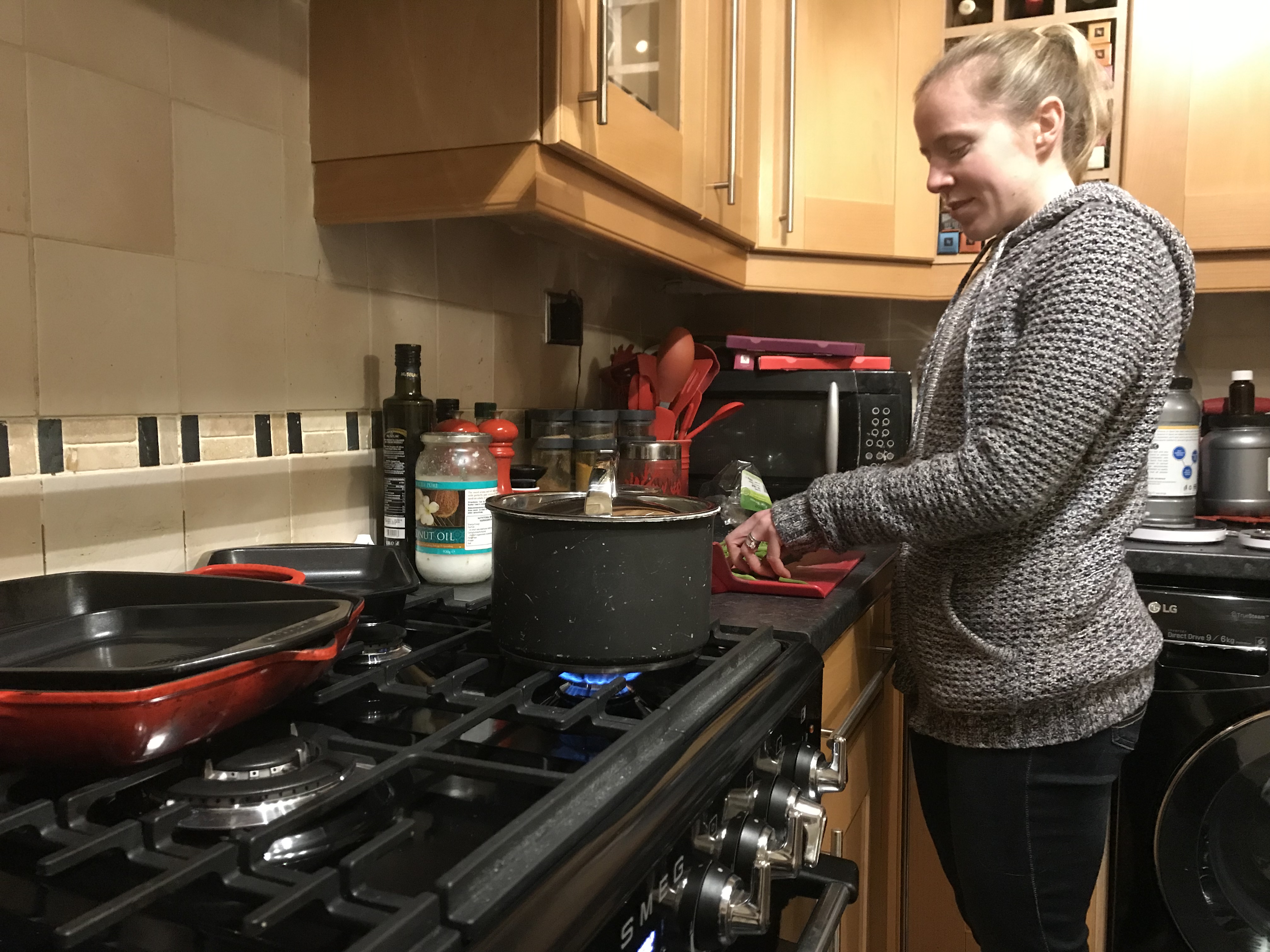 A lot of what I have written about on this blog focuses on how I successfully cope in the kitchen without sight. However, it would be wrong of me to pretend that it is easy, simple and that it never goes wrong. There is always a higher risk of hurting yourself, when you are cooking without sight and I regularly do this, while also making mistakes and using the wrong ingredients. Here are a few examples of some of the classic mistakes I have made.

The first and most common is burning myself by accidentally touching something hot. As I can’t see, I feel around and use my hands a lot more than a sighted person. This means that I will end up touching things I shouldn’t. I’m forever burning the tips of my fingers when I’m feeling around for objects in a hot pan, using my hands to turn food over when cooking it or even just accidentally knocking against something hot.

Another burning related mishap, when you can’t see, is walking in to someone or something when carrying something hot. I try to minimise carrying too many hot drinks for this reason and if I do, I will carry it in both hands to help keep it more steady. I once accidentally hit Neil with a baking dish straight from the oven because I didn’t realise he was standing so close to me. I just caught him with the corner, branding an L shape on his arm. At least he will never forget he’s mine now.

Accidentally cutting myself is another high risk, when handling sharp objects without sight. I’ve already written a bit about how I safely manage with knives, but sometimes it does go wrong. I also have to be extra careful when walking around with knives, incase there is someone else near by and also where and how I place the knife down on the surface, once I have used it. The last thing I want to do while feeling around, is to accidentally brush against a sharp edge and cut myself.

Other less painful, but just as common mishaps include, opening the wrong tin or using the wrong ingredients. I’ve learned from experience to always double check what is in a tin before I empty it in to a pan, but it is very easy to open a tin of beans instead of tomatoes, or tuna instead of pineapple. I once poured a tin of tomatoes in to a curry instead of coconut milk, fortunately, it wasn’t the end of the world and still tasted good, but I’m not sure how successful it would have been if it was the other way round and I put coconut milk in my bolognese instead.

Other ingredient mix ups I’ve had include, dried chickpeas instead of barley in a risotto, which wasn’t great but fortunately still edible at least. One ingredient mix up that I spoke about earlier this year was when I accidentally put lettuce in my chicken, kale and mushroom pilaf instead of kale, which I really wouldn’t recommend.

For a while now, I’m not even sure how long, I’ve had my flours mixed up and have been using plain instead of self raising and self raising instead of plain. I only noticed the other week when I tried to make bread and it didn’t quite turn out like it should.

Several times I have gone to pour liquid in to a pan or bowl and completely missed, pouring liquid all over the side instead. I’ve also on many occasions knocked over bottles of oil, vinegar or other sauces that I haven’t yet put the lid back on and spilt it everywhere. My kitchen is never the cleanest when I cook, but thats part of the fun.

One other thing that occasionally happens when I am cooking, is that objects that don’t belong in the meal sometimes end up in there anyway. I’ve learnt to always check that I’ve removed teaspoons from jugs or cups that I’ve been using to stir in stock cubes or anything like that, otherwise they may end up also getting poured in to my pan. Another one for this is the top of a tin. Fortunately, when you stir, you can often feel if there is something that shouldn’t be in there, especially if it is large, so you are able to find it and fish it out, but other times it just goes unnoticed. I’ve many a time cooked something with vegetable peelings, especially onion skins in it by mistake. Fortunately when I do this, Neil is very forgiving, but I would be a lot more embarrassed if I had other guests around.

So there you have it, cooking when you can’t see is not always plain sailing, but I can’t let it deter me. I love doing what I do and so the odd mishap isn’t going to put me off. If I’m honest, most of the time I find my mishaps funny, even the painful ones, once the pain has gone away, but yes, sometimes I do find them bloody frustrating too. If you have a regular mishap you make in the kitchen, please do share. Its important not to judge and have fun when you cook.

Filed Under: In The Kitchen
Vitamix
My Kitchen Struggles