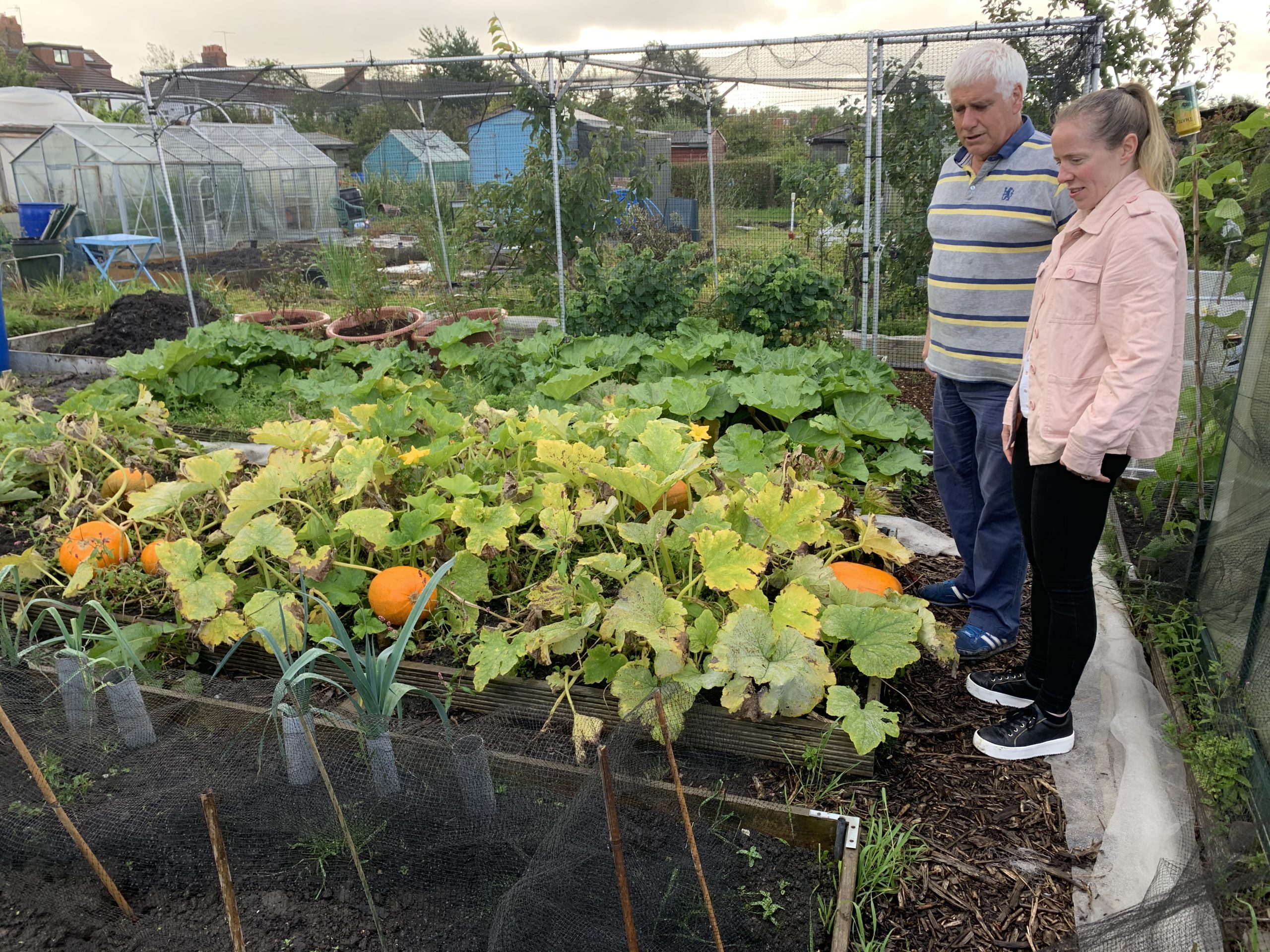 I’ve mentioned several times now on here that my dad has an allotment and he regularly supplies me with home-grown vegetables. In lots of ways, me and my dad are very similar. We are both very driven, determined, focused and resilient. We are both good at maths but can not spell, we both like to have and stick to a plan and hate being late. However, there are a couple of things in which we differ, one being that he is green fingered and I’m not, The other is that I like to eat vegetables and he doesn’t. So my dad grows lots of different vegetables in his allotment for his enjoyment and then I get to eat them, for mine. Its perfect.

However, thanks to lockdown and the current covid restrictions, I’ve not been able to see my family very much, so my supply of home-grown vegetables has been somewhat reduced. Last weekend was the first time Neil and I felt confident enough to get the train over to Liverpool and see my parents for over 6 months. I have seen them once since the start of lockdown, when my brother and his girlfriend came and drove us over to see them in early July, but that is all. This is something, I must admit, I’ve found really hard. Not just because I’ve missed the ready supply of vegetables but also because I’ve missed them. I’m very close to my parents, they try to come and watch me race whenever possible and I really appreciate their support.

One of the first, and best, things my dad did when he retired 7 years ago  was to apply for an allotment. He started off with a rather untamed and overgrown half plot just 5 minutes walk from the house. Over the years he has put hours of work in to it and created a very organised and productive space. Just before lockdown, he was finally able to take over the other half of his plot, which had been left abandoned for several years. Dad doesn’t just benefit from the physical and mental stimulation of tending his allotment, but also the social aspect. The other allotment owners come together in a really friendly community, helping each other out when needed, sharing advice, a helping hand and even their own crops from time to time. Thanks to the support of a few of the others and the extra time available due to lockdown, dad was able to clear out the other half and start to get on top of it. The problem has now been what to do with all the vegetables and fruit he grows, while I haven’t been able to take any off his hands. The result is that mum has been making lots of soup, chutney and jam. Her freezer is also packed with frozen veg as well.

In the past I’ve tended to avoid visiting his allotment as like I say, I’m not a fan of gardening, but I thought it was about time I took a look and see what he has been up to. So last Sunday we all took a walk to the allotment to collect anything that was ready to pick for me to take home. I was really impressed with how much he is now growing. He has split the space up in to different sections. There is an area for the beans and broccoli, he grows both green and runner. One for cabbages and chard, we picked the first cabbage to have with our Sunday roast that day. He has a fruit cage where he grows strawberries, raspberries and blueberries. They aren’t overly fruitful yet, but I did get to pick and eat a strawberry while I was there. One of his most successful crops this year has been his pumpkins. We picked 2 rather large ones, which I made Neil carry home in his rucksack. I’m not sure he was overly impressed but hopefully he will appreciate it when he gets to eat everything I cook with them.

There is a greenhouse filled with various types of chilli plants, as well as peppers. A polytunnel for his many tomato plants, as well as sweet potatoes. He also grows courgettes, beetroots, cucumber, potatoes, turnips, the list is endless. A few things he tells me haven’t grown so well this year, like his mange-tout and his carrots, but plenty have been successful. He is very proud of it and rightly so.

All this is only from the older half of the plot. He hasn’t had time to plant much yet in the new half. However it does already have a few fruit trees including a pear tree which is fruiting just now. A few of the bunches kept hitting us on the head while we walked round. It was amazing to pick so much stuff and bring it home to eat. I came home with pumpkins, courgettes, chillies, garlic, onion, tomatoes, peppers, chard, beetroot, runner and green beans and pears. I barely had to buy any veg from Tesco this week, saving me a lot of money. I’ve really enjoyed cooking with it all and trying out new recipes, which I will be sharing over the next few weeks.

I really enjoyed seeing what my dad had done with the allotment. He obviously gets a lot of pleasure out of it and I imagine successfully growing things is very rewarding. There is an element of me that would love to do it as well, but I remain unconvinced. I like the idea of a ready supply of vegetables but I don’t like the idea of the hard and dirty work that goes in to actually growing them. I really don’t like getting my hands dirty. Also if I was to start growing things, I would put my dad out of his job and I don’t want to do that. I like seeing how happy it makes him.

It was a lovely weekend spent back home. Not just because of getting all the veg but also spending some quality family time together. The other highlight was my mum’s roast dinner. I’ve already mentioned that we had home grown cabbage with our roast beef, Yorkshire pudding, roast potatoes, roast parsnips and mashed carrot and turnip. We also had home made cherry pie for pudding using the cherries grown on the tree in the back garden. Mum also has her own herb garden, so not only did I go home with all the already mentioned fruit and veg, but a bag full of herbs as well. However, I’ll have to talk more about that another time as this is already a long blog.

Filed Under: In The Kitchen
Haar At Home