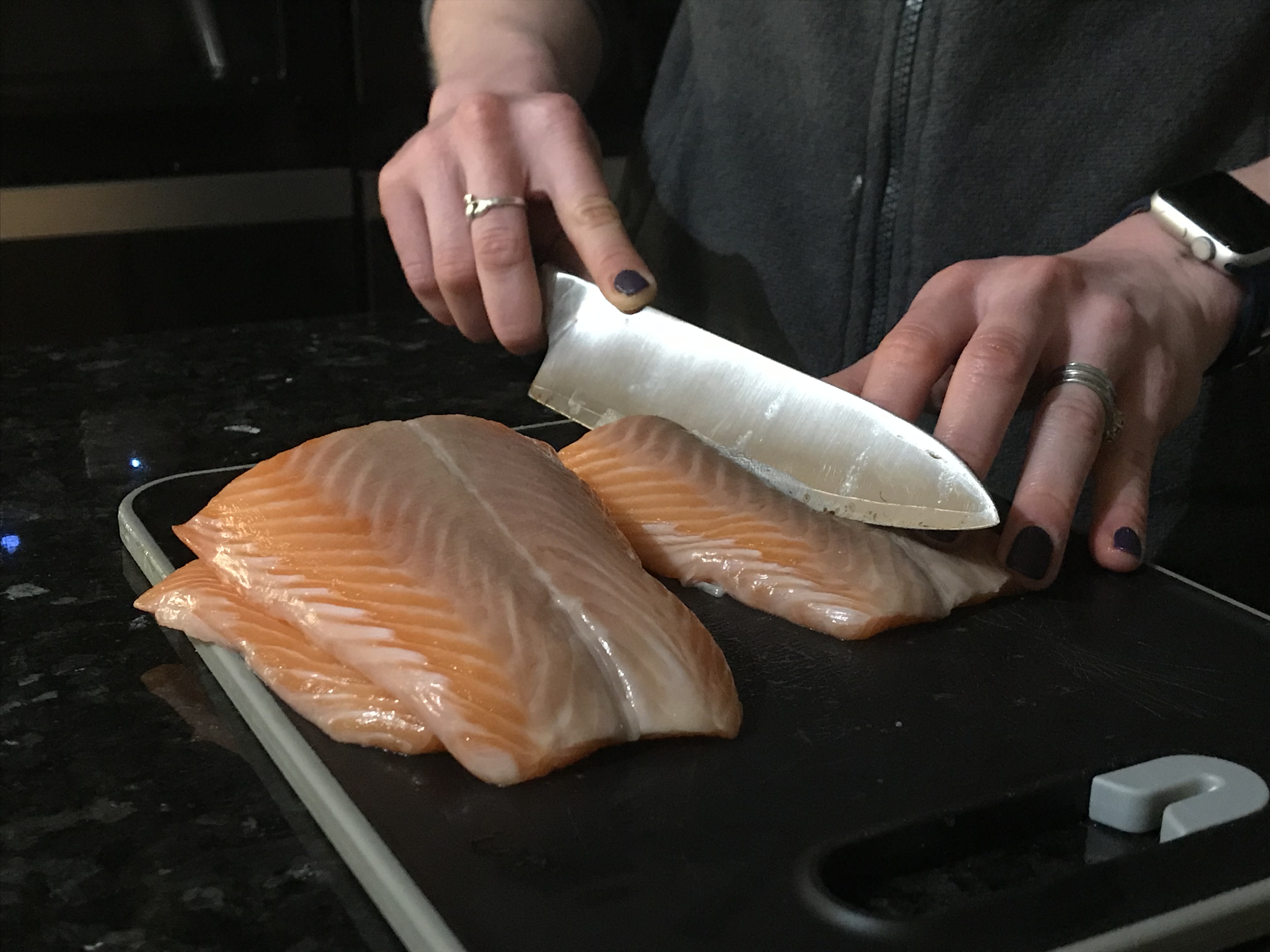 If I had to choose between only eating meat or only eating fish and seafood for the rest of my life, then fish would win hands down. However fish can be a lot trickier to cook and eat when you can’t see, especially if it hasn’t been filleted or still comes in it’s shell. In my previous blog, Handling Meat, I explain that I don’t like dealing with meat that is still on the bone and this goes the same for fish.

Often when I am in restaurants I have a real dilemma, as I love the sound of a dish that has fish or seafood in it, but I’m nervous to order it incase it comes in a shell or with bones in. Part of the problem is that I really don’t know how to correctly remove seafood from their shells, and what is safe to eat and not. At some point it would be amazing to be shown by someone how to do it properly but I haven’t yet found that person.

I must admit though, there is another part of me that is slightly squeamish about having something that still looks alive on my plate. I’m fine with eating meat or fish that no longer looks like the animal it came from, but if there is a reminder that it once was alive, then I’m not so sure. If I was more confident in handling seafood correctly though then I think I could overcome this. I used to think I didn’t like rare steak because there was still blood in it but actually when I did try it once when at a race in Belgium and found it delicious I got over it very quickly.

When preparing fish myself I generally buy boneless fillets if available. I do enjoy crispy skin so I’m not so worried about this. Although if the recipe requires the skin to be removed i prefer to get fish that has been skinned as removing the skin myself is a little tricky. It’s much easier to remove it when it is cooked as it just comes away but doing it myself when raw requires knife skills that I don’t possess.

I can feel where the skin is on fish when it is both raw and cooked because it is a different texture to the flesh. When it is cooked but not crispy it becomes slimy and can very easily be peeled away. I always do this before I serve as it really isn’t a nice texture in your mouth and if you can’t see what you are putting on your fork, then you don’t want to accidentally do this.

When preparing fish to be cooked I always check it for bones, even if on packaging it claims to be boneless as small bones can often be missed. I feel along the fillet and if I locate any with my fingers I either pull them out or cut them out if I have to. Sometimes even when double checking the odd bone slips through and ends up on my plate, but this is the risk for anyone when eating fish. It is a risk that I am more than happy to live with as fish is both extremely tasty and healthy.

There is such a massive variety of fish available out there and whenever I go to new countries I like to seek out the local fish and try it if possible. I’ve tried perch, snapper, grouper, kingklip, snook, and cuttlefish to name just a few. There are very few I’ve tried and not liked. Turbot is one, the texture just didn’t agree with me, and squid is another, but I think this is more because I have only really ever had it when it is overcooked and rubbery.

When cooking fish I follow similar principles to when cooking meat. I rely on a timer and touch to know when it is cooked. If it doesn’t flake apart when you press it then it isn’t cooked enough is a great rule to go by. The firmer it feels the more cooked it is. I prefer to cook fillets rather than large pieces like a whole side of salmon, as it is far easier to tell it is cooked all the way through and as a bonus doesn’t take as long to cook.

Frustratingly, I do feel that my lack of sight does hinder me around fish a little. As I state earlier in this blog it restricts my choices when out in restaurants and my confidence in buying and preparing fresh fish. I would love to be more adventurous when preparing and cooking fish but I can’t just go and watch youtube videos or chef demonstrations to see what it is I need to be doing. One day I would love to sit down with someone who could show me exactly what to do, are there any volunteers? Then I could write a blog about my experience and maybe help some other visually impaired people in the same position as me.

Filed Under: In The Kitchen
Handling Meat
Is it Safe to Eat?