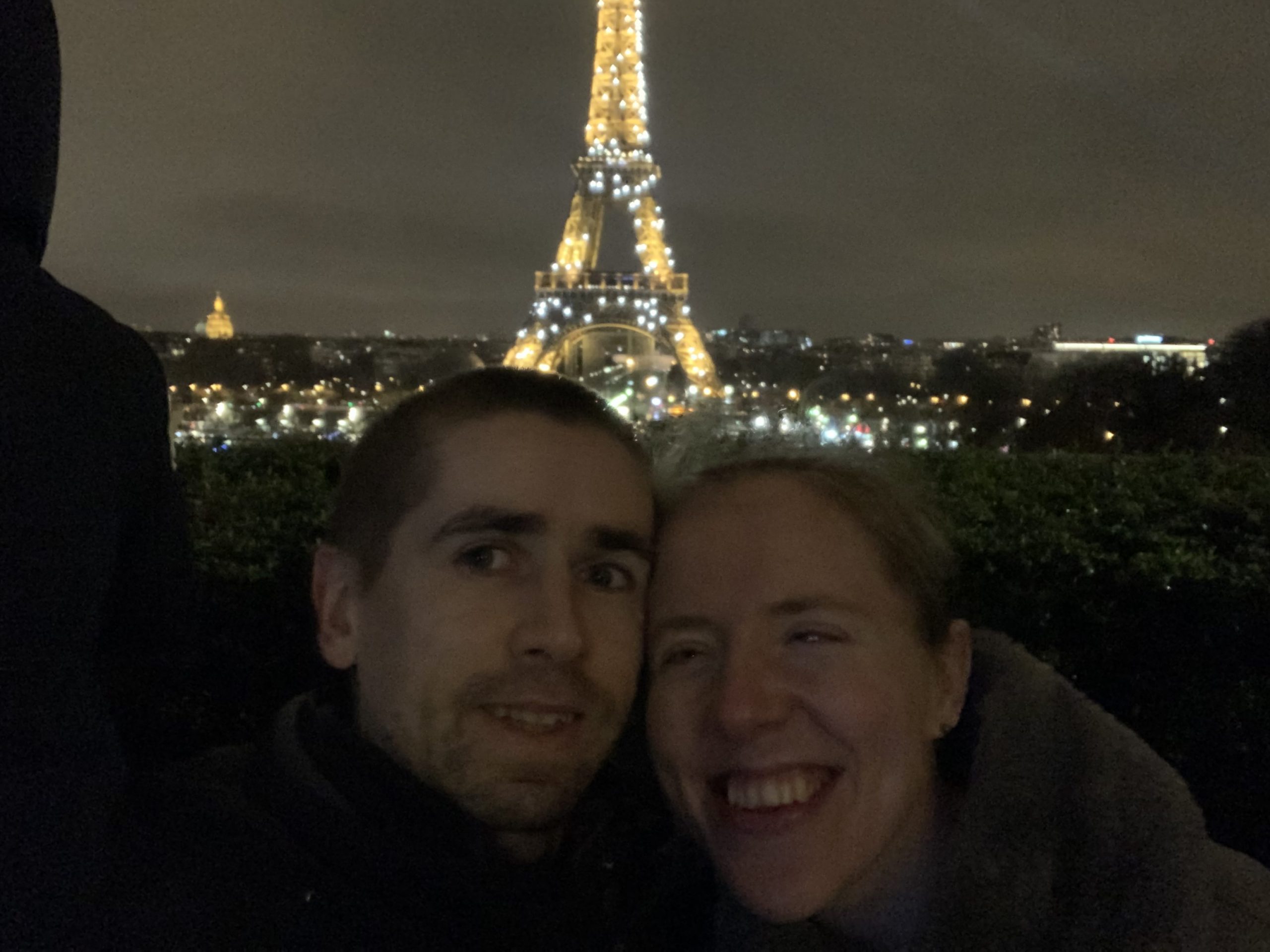 Following our Track World Championships earlier this month, myself and Neil took a couple of weeks off from training to recover and refresh. As part of our break we decided to go away for a few days. One of the things we both enjoy doing is eating and drinking, so we decided to incorporate this in to our break. Paris is a city known for its food, especially its sweet pastries, wine and cheese. These are 3 things I love to eat but try to limit when i’m in training as they aren’t so nutritionally valuable. Throw in the fact that Neil had yet to ever visit France and this was all we needed for a reason to choose to go there for our time off.

As I’m known to do, I spent lots of time planning where we would go, what we would do, and most importantly where and what to eat. The hotel was chosen purely for it’s location close to several good restaurants, rather than its proximity to landmarks or tourist attractions. There are 2 reasons for this, one is that it saved us a lot of money to spend on food and drink instead and the other was that Neil’s vision is practically non-existent in low level lighting or darkness, so travelling a lot of an evening in a strange place becomes a lot more tricky. One of the restaurants we wanted to try was a very highly rated and saught after Michelin starred restaurant called Septime. However, it is very difficult to secure a booking and unfortunately we missed out. Thankfully though, Paris is a city with almost 150 Michelin starred restaurants and there was another one only a minute walk from our hotel that we were able to book, so we did this on the Saturday evening.

Any disappointment in not securing the first booking was quickly banished once we arrived at the restaurant, called Automne, as the customer service was second to none and the menu was delicious. When booking we had mentioned our visual impairments and asked for a well lit table for Neil. They obviously took this in to consideration and sat us in the perfect spot. All the front of house staff spoke perfect English and took the time to explain everything. We decided to choose the discovery 7 course tasting menu. Within reading the first 3 named courses, which were crab and crayfish mousse, cheese soup with bacon, mushrooms and truffle and then scallop with parmesan, I was sold. There was absolutely no need for Neil to read any further as I was in my happy place. I love cheese, fish and mushrooms. Its safe to say that the food did not disappoint. Although it was 7 courses, they were all small and very well spaced out. We spent over 3 hours at our table. We did also add in the cheese board as an extra. When in France why not eat more cheese? With our food we sipped on a very delicious white wine which our sommelier recommended to match our meal. The stand out dish was definitely the cheese soup, closely followed by the chocolate ganache for dessert, but there really wasn’t a bad dish on there. I actually felt like I had come off better for going there than to the other restaurant, even though I have no idea what it would have been like as it was so enjoyable. One of the best food experiences of my life.

The Michelin meal was on the third night of our stay. The first meal we had was at a typically Parisian bistro. When I travel I like to indulge in traditional cuisine. I can eat a good indian, Italian or Thai meal at home. Arguably I can also enjoy a French bistro experience in Manchester, but its not quite as authentic. This bistro, called Bistrot Paul Bert, was one of the highest rated in Paris, particularly recommended for its steak frites and desserts. It was also 2 minutes walk from our hotel so ideal. My research was justified, not only was the steak in peppercorn sauce cooked perfectly, but the chips were addictively crisp on the outside and soft in the middle. There was also a mountain of them to share, so they did not scrimp on the portions.

One of the more well known French desserts is called Ile Flottante, a whipped egg white meringue floating in a pool of cold vanilla custard. It is something we have seen being made on Masterchef and Neil in particular wanted to try. I had seen they often have this on the dessert menu and it is particularly highly-rated, so we were both hoping it would appear. Fortunately it didn’t disappoint, along with Paris-Brest, another typically French dessert which almost swayed me to change my mind. I did get to sample one of these later on in my trip. The Ile was a very interesting texture, not what I was expecting. It was incredibly light and airy, even lighter than a mousse. It really did feel like eating a cloud, as it dissolved so easily in your mouth. The custard was lovely and creamy, with a sweet flavour that perfectly balanced and cut through the meringue. To finish the dish it was sprinkled with some flaked almonds and other caramelised nuts to add texture and keep it interesting. It was a lot lighter than it looked and a perfect end to a rich meal.

Other evening meals we had included a much lighter seafood meal on the Friday night from the sister restaurant to Septime, the restaurant we didn’t manage to get a booking for, called Clamato, and crepes, from Creperie Bretonne Fleurie, because you can’t go to France and not have pancakes at some point. On the Friday afternoon we had been on a chocolate and pastry tasting tour, more on that to follow, and so were not overly hungry. Clamato was perfect as it was just lots of small plates so we could order as much or little as we chose. We kept it light with devilled boiled eggs with caviar, which were so delicious but we unfortunately forgot to take a photo of. The same goes for the tempura monkfish. The one we did remember to photograph was trout based, although I can’t quite remember the finer details.

The creperie we went to on the Sunday night was less than a minute from the hotel. Again it came very highly rated and again it did not disappoint. Both savoury and sweet crepes were incredibly thin, the savoury ones filled with cheese, mushrooms and ham, or in my case andouille, a type of pork offal sausage that is a French delicacy, which I bravely decided to try. I had already sampled a snail earlier that day so what did I have to lose? It was definitely an acquired taste, quite strong, not something I would order again, but I’m glad I tried it. We kept it classical with our dessert choice and chose Crepe Suzette, a very thin pancake spread with orange marmalade and doused in grand marnier which is then set alight at the table. Pretty cool but I’m glad the waitress could see what she was doing. I made sure I sat well back but very much enjoyed the noise and smell of it burning. The taste of it was also very enjoyable.

I have already written too many words for this post and I haven’t even touched on breakfasts and lunches, as well as the two food tours and tastings we did. That will have to be saved for my next instalment. If you take one thing away from this post it is that we made sure we ate a lot, sampled plenty of authentic French food and also indulged in the odd glass or two of very good French wine. Stay tuned for the next instalment, coming in the next couple of days.