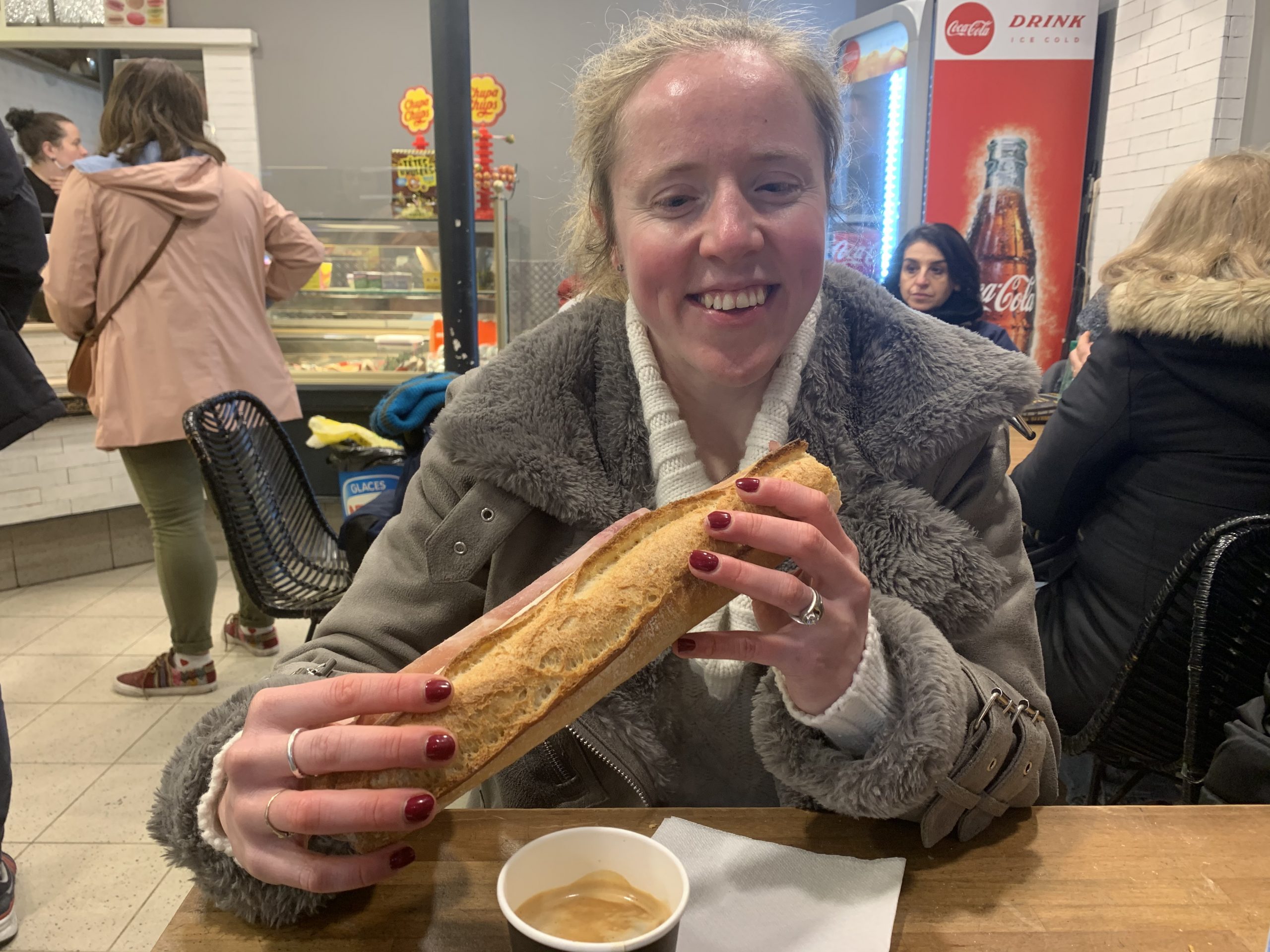 In the first part of my foodie adventures in Paris, I describe my experiences around our evening meals. However we also experienced so much more during the day. People aren’t lying when they claim that there is a bakery on every street corner in Paris. It has over 1000 bakeries or boulangeries registered within the city. This means that whereever you are walking, you can smell the amazing scent of bread, pastry or chocolate baking. It has the effect of making you feel hungry all the time, And as there were so many, it only seemed right that we should do our best to try as many as possible. After all, we needed plenty of energy to fuel the miles we walked while exploring. Thats what I told myself anyway.

Friday mornings offering was a pain au chocolate, alongside a coffee in a cafe close to our hotel. It was pretty standard to be honest, but you could definitely tell it was fresh. We then went to explore the Notre Dame area of Paris, before getting a hop-on-hop-off bus tour round the most popular sites. Notre Dame is undergoing lots of renovations due to the fire last year, so there wasn’t actually much to see, and as we had a little time to kill until our bus, we decided to go in to another bakery and sample a second pastry. We forgot to photograph this one, a shame as it turned out to be something quite special. It was supposedly an almond croissant, but I can only describe it as a cross between a Bakewell slice and a croissant. It was delicious though and rather large. We left feeling very satisfied.

For lunch that day we had planned to grab a baguette from a local bakery but we were both still full from our earlier pastry. Instead we opted for soup from a bistro we chanced upon when walking towards our afternoon activity. Onion soup is a traditional French dish, so it only seemed right that we should sample one while in Paris. I’m not an onion soup expert, but this one seemed to tick all the right boxes. It had a lot of texture in it from all the crunchy croutons and was very cheesy. Infact there seemed to be more cheese than onion, something I’m not complaining about.

Friday afternoon was spent doing a chocolate and pastry tasting tour around the Saint Germain area of Paris. Within this tour we sampled several different chocolates, sourdough bread from a very famous bakery called Poilane, where we also shared the most delicious apple turnover I’ve ever had. Another highlight from the tour were the macarons from Pierre Herme where I sampled a chocolate and passion fruit one and Neil had pistachio, cinnamon and cherry. We ended up sharing them as we both wanted the other to taste how incredible they were. They were so delicate but packed in so much flavour, I’m drooling now just thinking about them.

This wasn’t all we sampled on the tour, we also got to share a Paris-Brest, a traditional French pastry filled with a praline cream. Sharing one got messy but it was worth it. Normally I wouldn’t share, but by this point on the tour I was starting to fill up. Thankfully though we were nearing the end and our final taste was a shot of hot chocolate. This was not your average hot chocolate though, as it was made using lots of different spices. It was made to replicate the drinking chocolate of old that was drank back in the 18th century before solid chocolate was developped. A perfect 3 hours spent wandering the streets of Paris, learning about the city and sampling its delicacies en route. I highly recommend doing something like this for anyone with a sweet tooth.

Saturday morning’s breakfast was a couple of pastries, one croissant and one praline brioche picked up from a Parisian bakery chain called Maison Landemaine on the way to the nearest metro stop from our hotel. We ate these on the way to the Eiffel Tower. The brioche was a particular highlight for me and definitely gave me the energy to climb the stairs of the tower to the second floor instead of taking the lift. An experience I would definitely recommend to others, as climbing it on foot gives you a much better appreciation of it’s structure and height.

After the tower, we took a very enjoyable cruise along the river Seine, before grabbing lunch at a local bakery called Le Fils du Boulanger. We opted to keep it simple with a classic Jambon Beurre, a ham and butter baguette. The baguette was very good, crunchy on the outside, soft in the middle. Although I must admit I did start to get jaw ache towards the end from having to work so hard to eat it. The French must have incredibly strong jaw muscles. Next it was off to the Arc de Triomphe and Champs Elysees, but not before we picked up a coffee eclair each to eat en route. These were particularly good and made me think I should probably sample more of these back home.

Sunday’s breakfast was a little special. Definitely not your typical breakfast of choice, but this pastry from La Patisserie Cyril Lignac called the Equinox came highly recommended as a must try and as it was again only round the corner from our hotel, it seemed only right. The Equinox is cylindrical in shape and is made of creme patisserie flavoured with vanilla. There is a central core of salted caramel butter on a very thin wafer base. It is definitely not a healthy choice for breakfast and also not the easiest to eat with your hands. However there wasn’t a choice for us as there was no option to sit in. We ate them sat on a bench in the middle of a park at 9 a.m on a chilly Sunday morning. Fortunately it was very quiet, so no one saw the mess we made, and I definitely didn’t regret it. As it was Valentine’s Day that week, the Equinox was coloured red and decorated with a heart. It was truly delicious and also incredibly impressive the skill that goes in to making them.

The reason we didn’t go in for a big breakfast on Sunday morning was because we were doing another food tour. This one was around Montmartre and up to Sacre Coeur. I was hoping for more croissants on this one, but unfortunately not to be. Instead we sampled lots more sweet things, including handmade to order cream puffs (very much like profiteroles but coated in sugar), madeleines, and more chocolate. One of the highlights from this tour was a savoury cheese filled pastry. I can not remember the name of it, but it was amazing. Warm, cheesey and incredibly comforting. The only downside was that, as it was a tasting tour, we only got half each. I could so have eaten a whole one. My least favourite food tasting of the whole trip was also on this tour, a snail. I had to get the tour guide to help me extract the snail from it’s shell and he was very good about showing me what to do, but even so, when I tasted it, I just wasn’t convinced. People are right when they describe them as having a very mushroomy texture and taste, but I just can’t rid myself of the thought that this is a snail. I’m glad I got to try one though. Lunch was also included in this tour where we sampled a variety of charcuterie and cheese with bread and of course wine. Overall it was a very pleasant way to spend 4 hours strolling round Paris and discovering new things.

In the afternoon we walked a bit more ourselves, absorbing the atmosphere before stopping for coffee, and yet another pastry, in a cafe called Carette in the Place des Vosges. Still remembering the delicious apple turnover I sampled on Friday’s food tour, I opted for another one of them and Neil went for a chocolate and almond croissant. Mine was nice, but not as good as the Poilane one, although I was incredibly impressed by the size and shape of it. As it was so light though, it looked a lot more substantial than it was. Just as a good Viennaiserie should.

Monday morning we chose to grab breakfast from another reputable Parisian bakery called Eric Keyser, very close to the Louvre, as we were heading there straight after. Keeping it classic, we opted for a plain croissant and a pain au chocolat each. This was probably the best breakfast we had in Paris. Possibly because it was one were we could sit down and drink coffee and eat at the same time, but more likely because the croissants were very fresh and flakey and the pain au chocolat did not disappoint on the chocolate front.

After exploring the Louvre, we headed to what ended up being another highlight of the trip, A cheese and wine lunch at a wine bar called Chateau. We booked it through Viator and there were two other couples doing it as well. The sommelier running the tasting was brilliant. It was very relaxed, he obviously knew his stuff, both the five wines and five cheeses were excellent and he shared lots of interesting facts about both French wine and cheese. Never once coming across pretentious, he made fun of the fact of others claiming they can smell different scents and detect different tastes in the wine, just telling us to relax and enjoy the experience for what it is.

Our final indulgence in Paris before heading to catch our flight home, was to head to Angelina’s for a famous hot chocolate and Mont Blanc dessert. We did have to take a long stroll first following our lunch to find room and sober up a little. Angelina’s is very famous for its hot chocolate, so there are always queues snaking out the door. Neil and I headed to the back to wait our turn, but were immediately ushered to the front and given the next available table. Both of us had our white canes with us, identifying that we couldn’t see, and they spotted this straight away. This summed up our experience of Paris on the disability awareness front. People went out of their way to help us, they were so welcoming and supportive and seemed a lot more clued up on how to help someone with a visual impairment. I didn’t take Tai with me for this trip, so I can’t comment on the reception for a Guide Dog, but my experience fills me with confidence that it would be a good one, so next time I will take her with me. The hot chocolate was incredibly rich, but not creamy. Its hard to explain, but just take my word that it was delicious. The Mont Blanc is a signature dish of Angelina’s and has a base of crunchy French meringue topped with whipped cream and finished with chestnut puree swirled around the top. It sounds a lot sweeter than it is and is the perfect accompaniment to the rich hot chocolate. A perfect end to an amazing few days of indulgence.

Writing this all down has made me realise just how much food we did eat on this trip. Maybe I should be a little embarrassed about how much, but i’m not. I have no regrets! I thoroughly enjoyed my experience and would definitely eat it all again. I hope you have enjoyed reading about my foodie adventures in Paris. I hope to share more of my experiences as and when they happen.