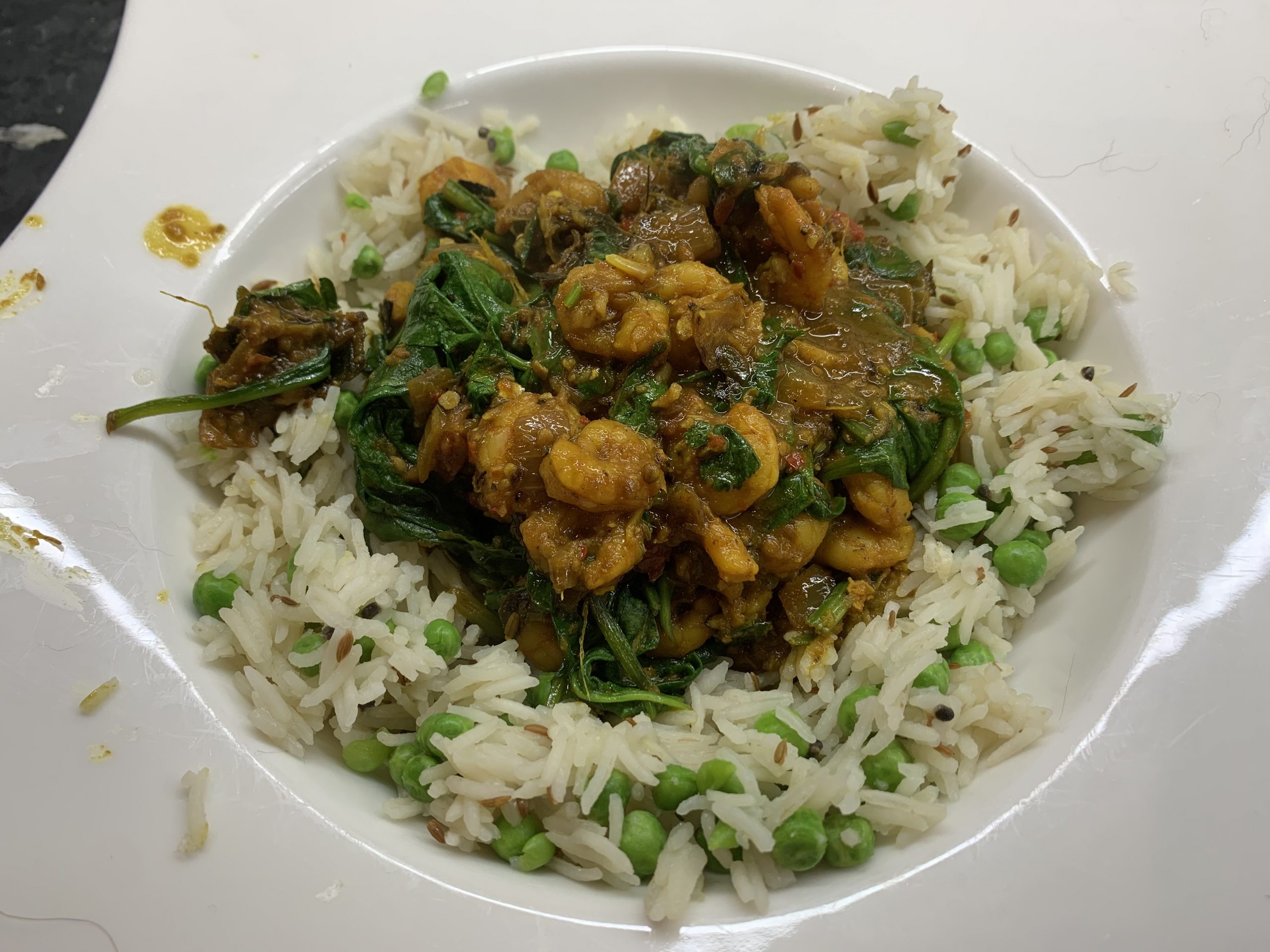 Sense Adventures is a company founded by Dee Jones, initially running outdoor activity holidays for the visually impaired. Like many others, Dee has had to expand in to the virtual world of zoom during the current climate. She offers several workshops including yoga, creative writing and Indian cookery. My initial interest was peaked by the yoga, but when I spotted the Indian cooking classes I knew I had to give them a go. I also alerted my mum to them, so she joined in as well.

The first one was last Thursday evening, demonstrating how to make Goan prawn curry. I love cooking Indian food. I say this often but the smells from all the different spices are so interesting and appealing. I think Indian food is some of the most multi sensory food out there. It is both interesting to cook and eat. You can cook along during the lesson but Mum and I both decided to just watch for the first one and cook it ourselves at a later date. For me this was partly because it was quite late on a Thursday evening and I like to eat quite early to give myself time to digest my food before bed. I also didn’t quite have all the ingredients needed at the time. I had ordered them online but they had not arrived. I didn’t want to use substitutes for the first time, I wanted to taste it as it should be.

Suki Pantal, who runs the cooking demonstrations, grew up in New Delhi but moved to the UK 5 years ago. She is fully sighted herself but gives clear instructions while cooking, to enable the visually impaired to follow what she is doing. Dee, who is visually impaired herself is also on hand to ask specific questions if she feels anything needs more clarification. Although I wasn’t cooking along I felt that I could have easily kept up and clearly understood what I needed to do. In fact while I was watching it, I spent most of the time wishing I had cooked along as it sounded so delicious.

A couple of days later the ingredients I was waiting on finally arrived, so on Saturday evening I attempted my first Goan prawn curry from scratch. I have tried a couple of Goan curries, one from one of my favourite Manchester based restaurants, Indian Tiffin Room and the other from Mowgli, another favourite of mine. Goa is in the south west of India and as it is on the coast, typically uses a vast array of seafood as well as coconut and tamarind. As a result of this, Goan curries are typically tangy, sweet and sour. The sourness comes from the tamarind, a tropical fruit found in Africa and across Asia. Tamarind paste or concentrate is often used in cooking to impart its flavour. It is the first time I have cooked with it. It has a very strong flavour so needs to be used sparingly. I’m glad I listened to Suki’s advice.

True to form, I couldn’t quite follow Suki’s recipe to the tee, adding spinach to sneak in an extra vegetable. I also served the curry with black cardamom rice, a recipe I got from Nisha Catona’s Mowgli recipe book on CKBK, which I added peas to as well. I just can’t help myself but I do like to stick to my principles of at least 3 portions of vegetables in my evening meal. The finished dish was delicious, the curry being really fresh, full of flavour and not heavy. Its definitely something I will make again. Next time I might try it with some white fish instead of prawns for a bit of variety. Mum hasn’t cooked the curry yet but when she does, she will use white fish as my dad won’t eat prawns. It is a big frustration for her because she loves them.

I’m really looking forward to next month‘s lesson where we will learn how to make chicken ghee roast, from Bangalore. I’m not familiar with this style and have never used ghee so I am intrigued. I like that I’m learning about new ingredients and how to use them. I think for the next one I will try cooking along as I’m now fairly confident I will be able to keep up.

This cooking lesson got me thinking that perhaps I could also offer some of my expertise in making healthy and nutritious meals. I could share my knowledge in nutrition and demonstrate to other blind and visually impaired people who were interested in how to make some of my own recipes. After all, part of my aim for this blog is to encourage other people living with sight loss to be more confident around the kitchen. So I have approached Sense Adventures and already spoken to Dee to discuss what I could offer. It is all very exciting so stand by for some news coming soon. If you are visually impaired and think that this would be of interest to you then please do get in touch. I would hate for you to miss out.

Filed Under: In The Kitchen
5 of my Favourite Curry Recipes
Eat Like a Champion