Ingredient of the Week: Aubergine 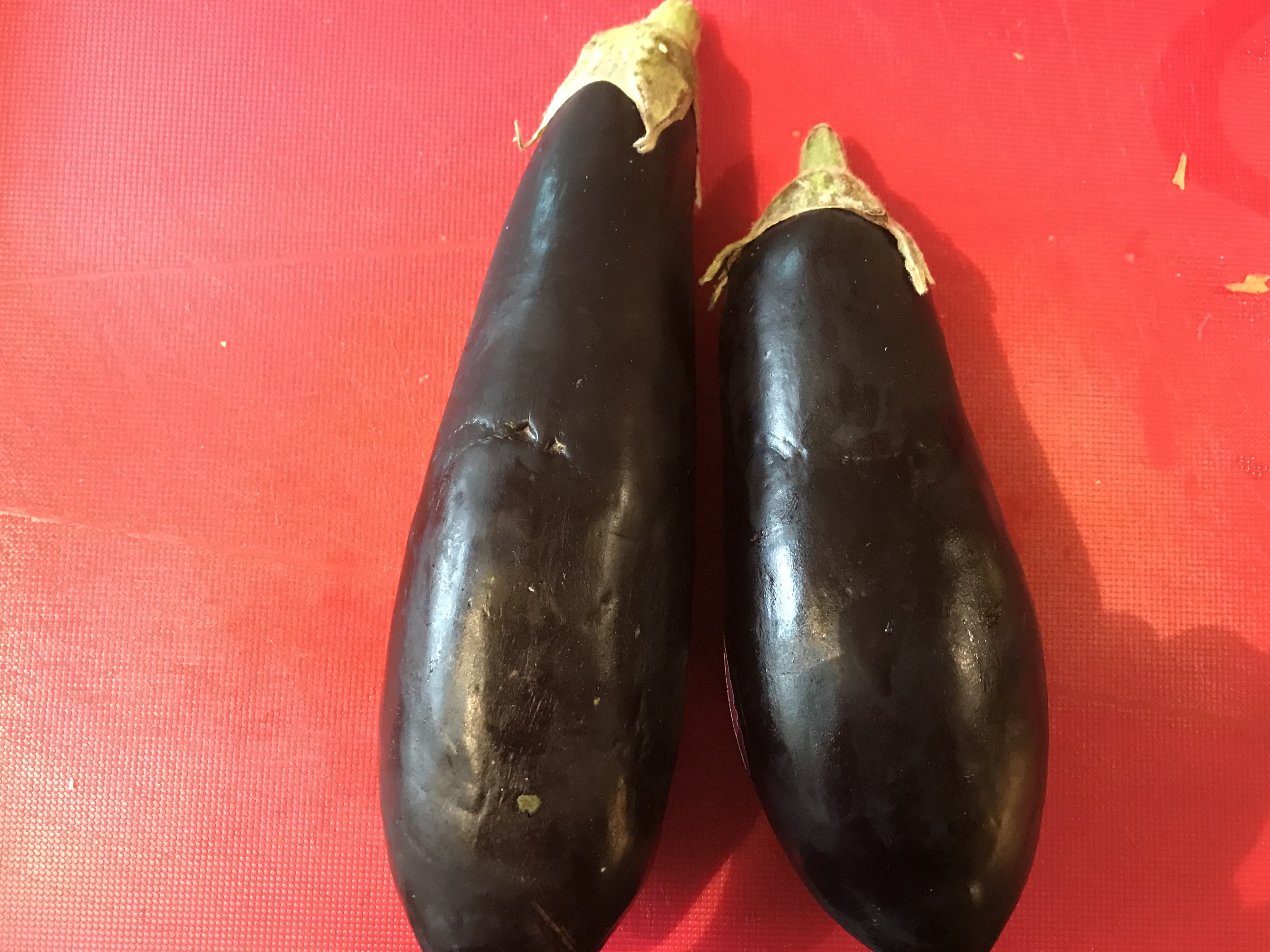 Aubergine, like avocado is not technically a vegetable but a berry. It has a tough outer skin, which is in general a deep glossy purple colour,  surrounding spongelike cream-coloured flesh with small edible seeds dotted throughout. It is treated like a vegetable and comes from the same family as tomatoes, potatoes and peppers. Another name for aubergine is eggplant due to its elongated egg/pair shape. There are other varieties that have different coloured skins, are slightly smaller or different shaped, but I’m focusing on the most common variety found in British supermarkets.

It is not the most popular of vegetables and not used as frequently in the British diet as say carrots or peas. I think that is because it is both a funny looking and feeling vegetable. Once when my niece was staying at my house and helping me put away my food shopping, she accidentally mistook it for a dog toy as she had never seen one before. I think the texture of it takes a bit of getting used to, I definitely wouldn’t recommend eating it raw or under-cooked as the flesh remains spongy and has a slightly bitter taste to it, so not very nice in your mouth. Once cooked however it softens and is much more palatable. It was initially grown in Asia so common in Asian cuisine like this roast aubergine and turkey dahl or this chicken, tomato and aubergine curry, but has now spread to Europe, Africa and the middle East. It is popular in Mediterranean cooking, like this Mediterranean fish pasta recipe and also in Moroccan cuisine like this harissa spiced aubergine and eggs.

Like salmon, aubergine is considered good brain food as it contains the phytonutrient nasunin. Found mainly in the skin of the aubergine it helps to protect against damage from oxidation to the brains cell membranes by protecting the lipids, or fats which control what goes in and out of cells. Cell membranes are predominantly made of fat and so require a lot of protection.

They are also a good source of fibre, which as we know is great for a healthy digestive system and helps to keep you feeling fuller for longer. There are also vitamins B1 or thiamin, and B6 or pyridoxine, which help to break down carbohydrate and fat in to a more accessible form of energy that the body’s muscles can use. Vitamin B6 also plays a vital role in the production of red blood cells and so is very important to include in your diet.

There is a myth tracing back to the ancient Mediterranean people that eating one a day for a month would make you go mad. They nicknamed it mad apple for this reason, so even though there are some health benefits to it, perhaps you should avoid eating them too regularly.

Firstly I slice off the stalk and any leaves surrounding it. Then I find it easiest to cut it in half lengthways so that I have a flat surface for stability. Then I place the flat side down on my chopping board and cut the aubergine in to the size of pieces my recipe requires.

In the past aubergines were very bitter to taste and so needed to be sprinkled with salt before cooking but now, the more modern varieties have lost their bitterness so the addition of salt is no longer required. They are delicious roasted, grilled, baked or added to a sauce. Just make sure you cook them for long enough so that they have softened and started to lose their distinct shape. They can also be fried but just be careful not to add too much oil as Aubergine flesh acts like a sponge and soaks up all the oil, making it greasy. Grilling it is apparently the most nutritious way to cook it but I’ve not actually attempted to do this yet. I’m not a big fan of my grill at times as I explain in my last blog post.

My favourite way to eat Aubergine is roasted for a long time so that the flesh starts to caramelise like in this Moroccan roast vegetables with salmon recipe, but it is also delicious when broken down in to a tomato sauce, like for this meatballs in tomato and aubergine sauce. It can also be stuffed with mince and baked in the oven but I find this a bit fiddly scooping out the flesh. It is a staple vegetable for many traditional Greek and Middle-Eastern dishes such as moussaka, which I haven’t got round to attempting to make, or the popular dip baba ghanoush.

It is not a vegetable I would ever choose to eat on its own as it is very bland but its spongelike flesh means that it does take on lots of other flavours very well. It really lends itself to being seasoned with lots of herbs and spices. So if you are going to cook with it i would definitely recommend adding plenty. Please let me know how you get on with adding this slightly more unusual vegetable in your diet. It is one that I have had to work on a little more to enjoy eating it. Over time I have learned how I like it and enjoy including it but only when it is on special offer.