Ingredient of the Week: Carrot 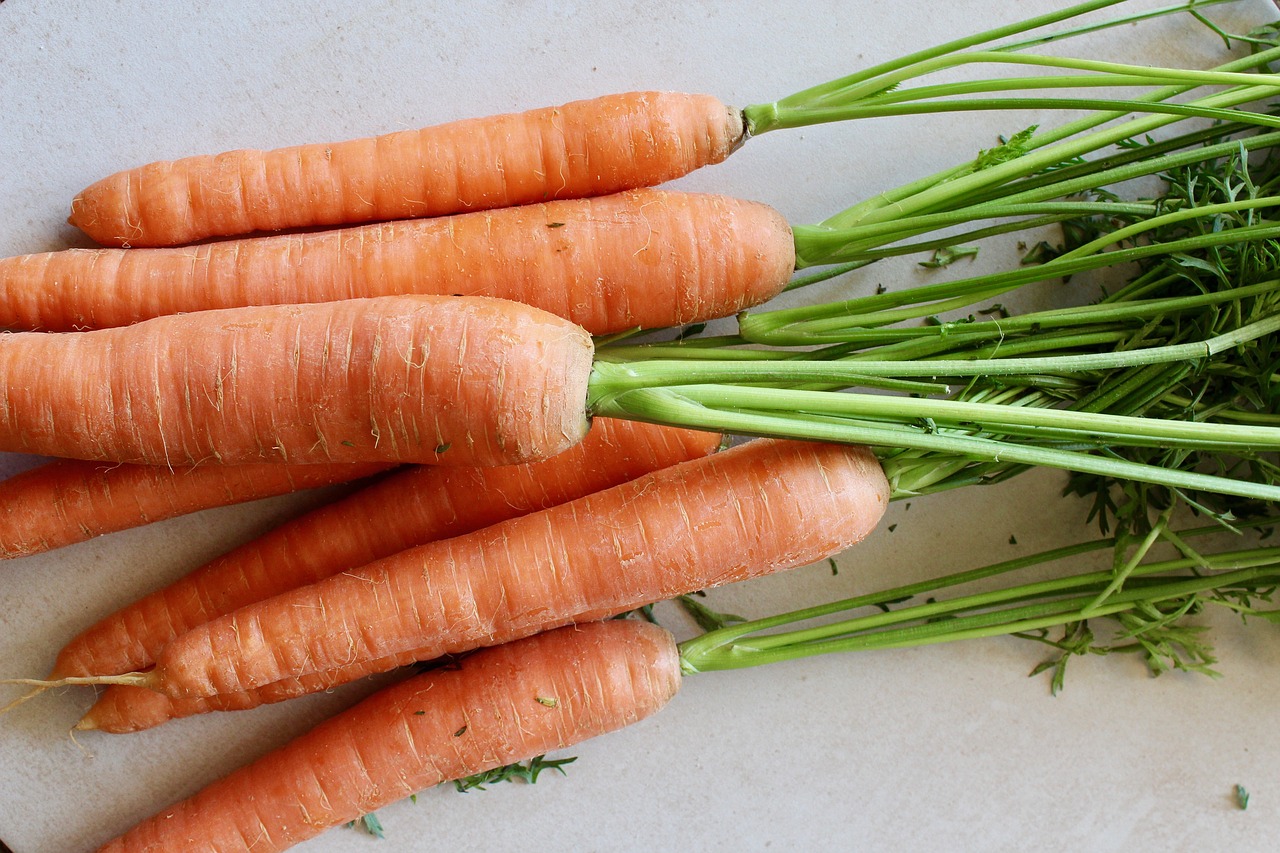 When I was a child I would only ever eat carrots raw. Even when my mum was making a Sunday roast dinner, she would have to leave some raw carrot to one side to go on my plate rather than give me cooked ones. I used to claim in my childish naivety that it was because it would help me to see in the dark. I don’t think I ever really believed what I was saying but I thought it funny and enjoyed the reaction I would get from other people. It would have taken a lot more than eating raw carrots to give me some sight but there was some level of fact behind this. Carrots in their raw or cooked form contain a high level of beta-carotene, which has been shown to be beneficial to good eye health. During the Second World War there was a propaganda campaign that played on the myth that eating carrots would help you see in the dark by claiming that It was thanks to feeding the British airforce pilots carrots that they were so good at shooting down enemy planes at night. My nan told me a version of this story once when I refused to eat my carrots. To be fair to her it worked and I have always eaten carrots ever since.

It is the high prevalence of beta-carotene that gives standard carrots their distinct orange colour, however you can get several other coloured varieties including purple, red, white and black. The nutritional composition of these carrots differ and so should be considered separately. They come from the same family of vegetables as parsnips, fennel and celery, as well as popular herbs coriander, parsley and dill. They are an extremely versatile vegetable and are found in popular recipes throughout the world. They can be grown successfully in many environments, which is why they are so popular and readily available. Over 40 million tonnes of carrots are grown each year. Even my dad grows them in his allotment. He keeps me well supplied which is great as they taste so much nicer straight from the ground than from a supermarket.

As I have already mentioned, carrots are a good source of beta-carotene and so good for maintaining healthy eyes. In fact, it is thanks to carrots that this important anti-oxidant got it’s name. Beta-carotene is a precursor to vitamin A, which is also needed by the body to maintain healthy skin and bones, as well as strengthen the immune system. There is evidence to suggest that vitamin A can help with the reduction of muscular pain following heavy training sessions for athletes.

Carrots also contain high levels of calcium, phosphorus and magnesium, which all play an important role in the development of strong bones, teeth, hair, skin and muscles. While magnesium has the added benefit of helping with the digestion of fat and nutrient absorption. Another role of calcium in the body is to help with the proper functioning of the heart muscles. There is evidence to suggest that including carrot in your diet can help lower the risk of developing cardio-vascular disease as a result of this.

If the carrots are fresh and still covered with dirt then it is definitely best to wash them first. Slice off the ends or top and tail them before peeling. Unfortunately most of the good nutrition in a lot of vegetables is stored right near the skin and so best to avoid peeling if possible. However carrot skin is not the nicest to eat and so I do remove it. The only exception for this is if they are little baby carrots as then the skin is much softer and sweeter so more pleasant. Once peeled cut, grate or slice as required.

Carrots can be baked, boiled, steamed, roasted or sautéed. They can be eaten raw in salads, blended in to juices, or even dehydrated and eaten in their dried form. They can feature in both savoury and sweet recipes and can even make for a healthy snack during the day.

I include them in so many of my recipes. They are great in a broth or chowder. They add a good crunch in to a stir-fry and take on spicy flavours really well in curries like this chicken root vegetable dahl or prawn korma. Traditional British dishes such as cottage pie often include carrots and they are commonly found served alongside meat and potatoes as in your typical Sunday roast, which I still haven’t attempted yet. They generally taste quite nice on their own and don’t need much adding to them to enhance their flavour, which is why you often find them added to many plates on the side, often with peas as well. I always think of a typical British meal as meat, potatoes, carrots and peas, which to me is so bland and uninspiring, but thats a personal opinion.

My favourite ways to enjoy carrots are roasted like in this chicken, cauliflower and root vegetable quinoa recipe, diced up and added in to this chorizo and root vegetable risotto, or simply cut in to batons and used to dip in to hummus. Quite a lot of recipes call for carrots to be very thinly sliced or julienned on a mandoline. I only recently got one of these that I could use and so plan to add this in to my repertoire soon.

Carrots definitely aren’t the most exciting or interesting of vegetables but there is something comforting and homely about them. Because they feature in so many recipes that my mum made when I was growing up they remind me of home. They are a safe addition to most meals and very few people dislike them. Please feel free to share any of your favourite carrot recipe suggestions and enjoy including them in your next meal.

2 thoughts on “Ingredient of the Week: Carrot”