Ingredient of the Week: Cauliflower 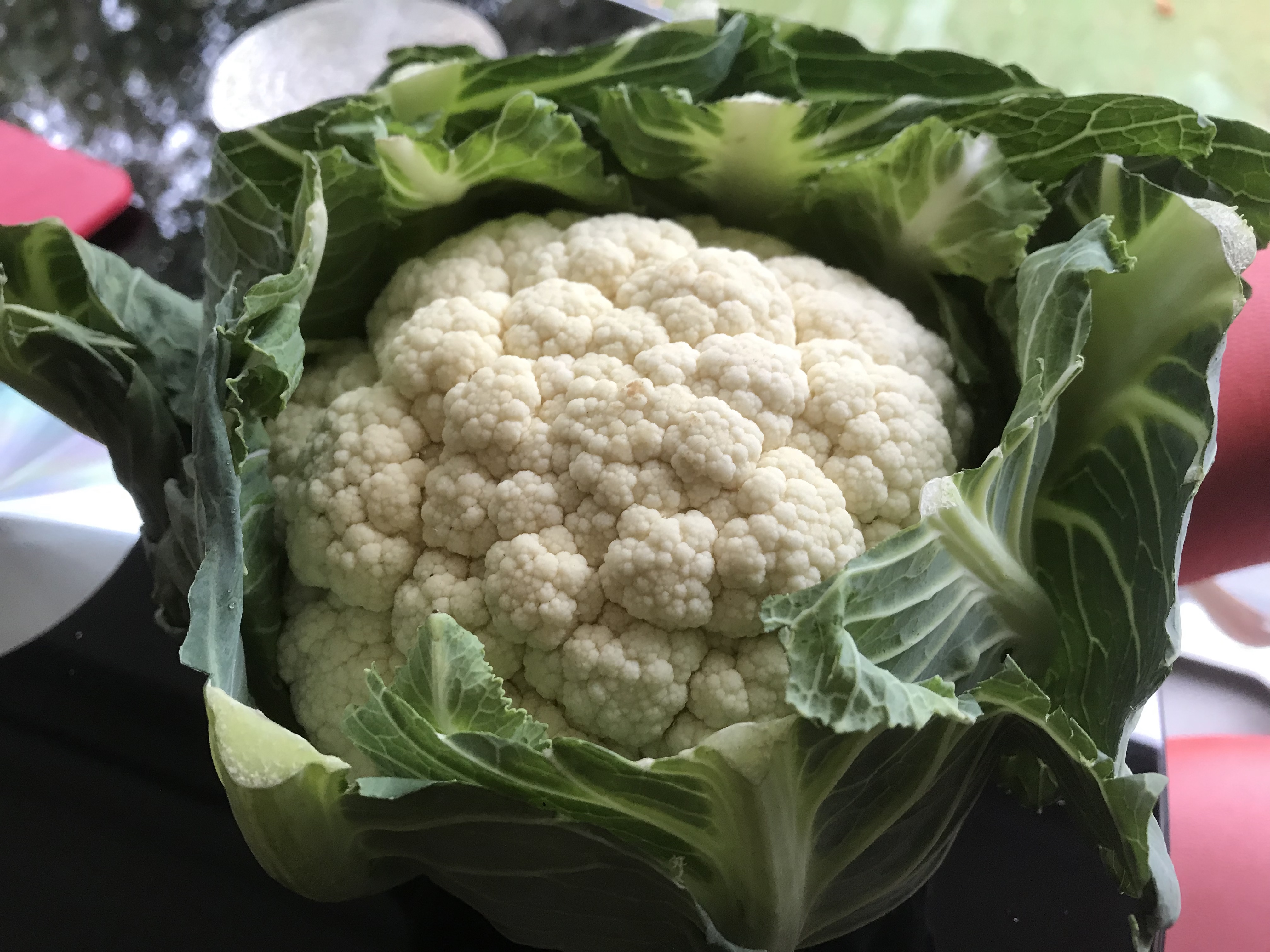 Cauliflower is one of Neil’s favourite vegetables. Whenever it is on special offer in Tesco I use it a lot as I know he enjoys it. It has been on special offer for the past couple of weeks, which is why there has been an influx of cauliflower recipes lately. It is a cruciferous vegetable like broccoli, kale and cabbage. Due to its white colouring, people often overlook it for more brightly coloured vegetables such as broccoli and kale, as we are told the more vibrant the colour of vegetable the more nutritious it is and that we should try and ‘eat the rainbow’. However cauliflower is actually packed full of nutrition. It contains a little of nearly all the vitamins that our bodies need, along with many important antioxidants and phytonutrients needed to stay healthy.

Although the most commonly available cauliflower is white, you can get other coloured varieties including purple, orange and green. The head or curd of the cauliflower is made up of smaller curds or florets tightly compacted together, surrounded by green leaves. The whole head of the cauliflower, including the stem and leaves are edible but people tend to discard quite a lot of it in favour of just the florets. I must admit, I don’t cook the leaves but I do enjoy adding the stem sliced up in to my recipes. It is most commonly found in Indian cuisine like this paneer and cauliflower curry, or in European cookery like this bacon and cauliflower pasta. A very popular British side dish is cauliflower cheese, which can be found served as an accompaniment in many restaurants to a roast dinner.

In recent times cauliflower has enjoyed a surge in popularity among the health conscious and calorie counters as one cup or portion only contains 25 calories. It can be blitzed up to form a fine grain and served as a low calorie substitute for rice or couscous. By binding the blitzed cauliflower with egg and ground almonds or cheese it can be made to resemble a pizza crust, and for the vegetarians and vegans amongst us, a wedge of cauliflower sliced out from the middle of the head can be pan fried as a substitute for steak or any other piece of meat.

Like many vegetables including green beans, avocado and swede, cauliflower is rich in vitamin C. In fact, It is one of the best sources for this very important vitamin as one cup or portion contains over 75% of the daily recommendation for both women and men. This immune boosting vitamin also assists with the uptake of iron in to the body, needed for making healthy red blood cells and the repair of damaged body cells and tissue. In addition, a high level of vitamin C in the diet is believed to help reduce post exercise muscle soreness.

It is another vegetable that has been found to have cancer fighting qualities, particularly prostate, ovarian, cervical, colonic and lung. This is because of its high levels of antioxidants, in particular sulforaphane, glucosinolates and isothiocyanates, which have all been found to slow down the formation and growth of tumours.

Firstly I snap off any of the outer leaves from the cauliflower with my hands if possible. I prefer to use my hands rather than a knife as it is safer. Then I cut off the end of the stalk before again breaking off as many of the florets with my hands. Sometimes I need to slice off larger florets with a knife and depending on what I’m making I will cut the florets up so that they are all a similar size. I try to use as much of the cauliflower as possible as the stem is still edible and actually pretty tasty. I don’t like to waste so it all goes in, not just the florets.

Cauliflower can be steamed, boiled, roasted, fried, sautéed and even eaten raw. It makes a tasty addition to curries, stir-fries, soups, pilaffs, and salads. It is best to not cook cauliflower for too long as some of the phytonutrients found in it contain sulphur, which is released when cooked, causing it to smell. Also when cooked for too long it starts to lose its shape and goes mushy. Definitely not recommended. I hate the texture of mushy cauliflower in my mouth. I also think that the longer you cook it for, the stronger the taste, which I don’t like. Cauliflower should be mild and nutty in flavour which is why it is so good for being paired with much stronger spices such as turmeric.

Although not the most nutritious way to eat cauliflower, as the longer you expose food to heat the more chance it has of losing some of its vital nutrients, my favourite way to eat it at home is roasted like in this chicken, cauliflower and root vegetable quinoa recipe. When roasted for long enough the edges start to go crispy and I love the different textures it gives in my mouth. My all time favourite cauliflower dish though is at an amazing Indochinese restaurant in Manchester that both myself and Neil adore called the Indian Tiffin Room. The dish is called Gobi Manchurian and the cauliflower is stir-fried in a wok with onion, peppers and spices. The cauliflower is coated in a really light batter and deep fried first, which makes it incredibly crispy and delicious, if not the healthiest. Gobi means cauliflower in Hindi which is where another famous Indian side dish, Aloo Gobi gets its name, Potato and cauliflower.

If you have a favourite cauliflower recipe then please share. Its such a versatile vegetable that you can pretty much do anything with.