Ingredient of the Week: Chestnuts 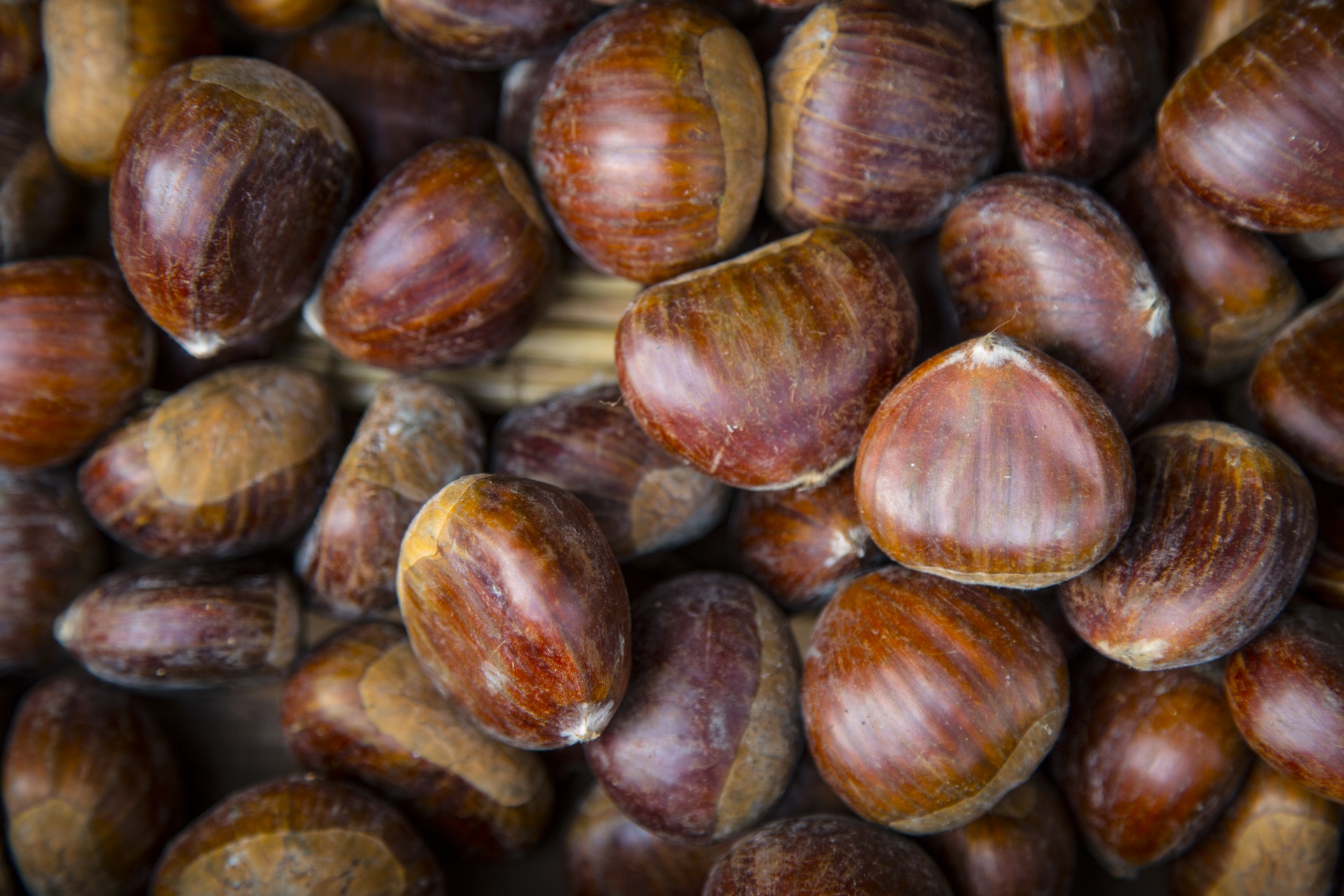 Chestnuts are something I associate with Christmas time. The obvious is chestnuts roasting on an open fire but also turkey with chestnut and sage stuffing. They are not an ingredient I ate or knew much about as a child, but this year I’ve tried to explore cooking with them a bit more and learn more about them. They are classed as a nut but differ to most other nuts as they have a much higher carbohydrate content and are lower in both protein and fat. They have a slightly sweet and soft texture when roasted, lending themselves to both sweet and savoury dishes.

Chestnuts, or sweet chestnuts, not to be confused with horse chestnuts (conkers) which are inedible or water chestnuts, which are common in Asian cuisine, grow on trees that are part of the beech tree family. The edible nut grows inside an inedible spiky shell that needs to be cracked open and removed before cooking. Their season runs mainly from October to December, which is why they are so commonly served around Christmas time. Despite their name, sweet chestnuts can be found in both sweet and savoury dishes. They do have a slightly sweet taste and are quite soft and powdery  in texture.

Chestnuts are high in fibre meaning they can help to keep you feeling fuller for longer, while also being good for your gut health. They are also a good source of many of the B vitamins, making them beneficial to our metabolism and helping us to release energy from the food we eat. The zinc found in chestnuts further helps with this, while also acting as an antioxidant and helping us to fight off colds and other infections by keeping our immune system strong.

Another antioxidant and immune boosting vitamin found in chestnuts is vitamin E, which is also needed for looking after our skin and eyes. Other minerals that chestnuts contain include calcium and iron. Calcium is needed to build strong bones and teeth, while iron is needed for the production of healthy red blood cells which transport much needed oxygen around our body, providing our muscles with the fuel they need to work.

Personally I prefer to buy them ready prepared and cooked so that I don’t have to worry about this stage. Merchant gourmet do sachets of them which aren’t too expensive.

Typically chestnuts are roasted, but they can also be boiled. They must not be eaten raw and once cooked the skin must be peeled off them before they are ready to eat. It does involve a lot of preparation if you are using fresh chestnuts, which is why I prefer to use pre-cooked ones. The peeling process needs to be done while still hot as it is impossible to peel when cold, adding to the difficulty of it.

Chestnuts partner really well with sprouts and bacon, which is why I have several recipes that do this including this bacon, sprout and chestnut stir-fry and this bacon, lentil and sprout salad. If sprouts really aren’t your thing then try them in this really tasty bacon, chestnut and barley risotto.

If you are feeling a little more adventurous then try using them in a pesto and serving with pasta, like in this recipe which I served with venison but you could use any protein source. You can also puree chestnuts and use them as a replacement to mash potato, but I have not tried this yet, or blend them in to a root vegetable soup with carrots and parsnips, but again I’ve not done this yet.

I’ve never had them in a sweet dish yet but apparently they pair really well with chocolate. Dried chestnuts can be ground to form a gluten-free flour and used in baking and pureed chestnuts can be blended with other ingredients, including cream to form an ice cream. These are all things I would like to attempt at some point but not yet.

I hope reading this has taught you a little more about the very festive chestnut and perhaps inspired you to cook and eat them more. If it has, then please share how you get on in the comments box below.