Ingredient of the Week: Chorizo 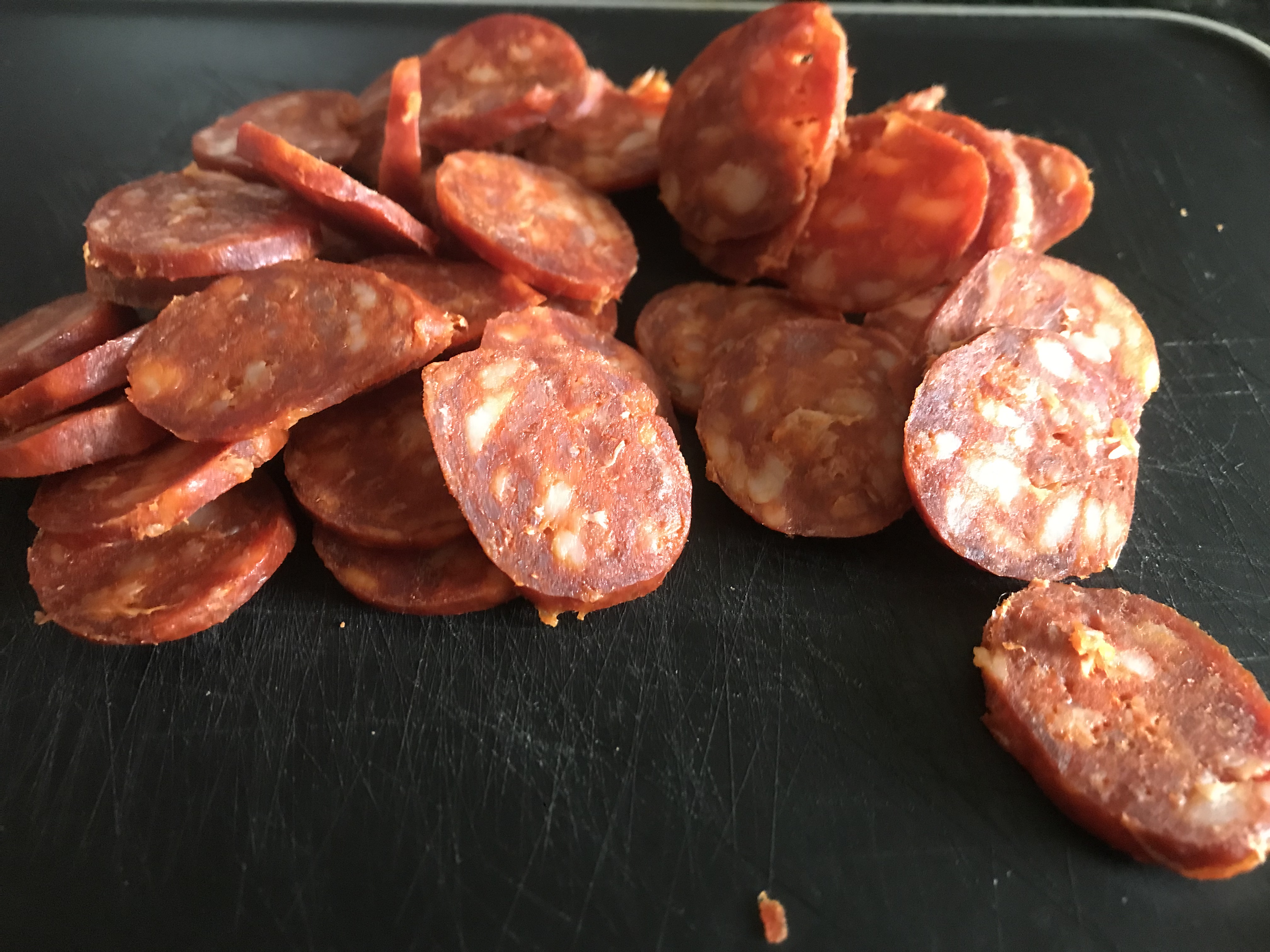 As I have been on a rest week from training this week, following the World Championships last weekend, I have let my usual food routine slide a little. Therefore, I thought that my ingredient of the week should reflect this and focus on a slightly less healthy ingredient. It is however one of my favourite things to eat!

Chorizo is a highly spiced pork based sausage. The Spanish variety uses smoked pork with a combination of sweet and smoked paprika to flavour it and give it its red colour. Mexican chorizo uses fresh pork with chilli, garlic and red pepper seasoning. As raw meat is used in Mexican chorizos, they must always be cooked, whereas the pork is cured for Spanish chorizos so some varieties can be eaten uncooked. I generally use the Spanish variety in my cooking, I prefer the texture and flavour. It has a very strong and distinct taste which lends itself perfectly to a risotto or stew.

Arguably it is not actually healthy as it is a processed meat which is high in fat and has a lot of added salt. There is evidence to suggest that a diet high in processed food increases the risk of developing bowel cancer. However it is not all bad as it is also high in B vitamins such as thiamine which is needed to help build proteins in the body as well as convert food to energy for the muscles. It is also a good source of vitamin B12 which the body requires to help with the uptake of iron and assists with the proper functioning of the nervous system. However, due to its high calorie and fat content, it is best only eaten in small amounts and occasionally.

Like the majority of sausages, chorizo comes inside a thin casing or skin. I prefer to remove this if possible but it is edible. I think removing it helps to release the flavour in to the meal. You can buy it in several forms, as a whole sausage which you then cut yourself and need to cook, or pre-sliced like salami, which you can eat straight away if you wish, or as chunks which you can add straight in to a sauce. I generally stick to the whole sausage option and slice it as small as possible as it then goes further.

I usually add it to a frying pan a couple of minutes after I have added onion, garlic and or chilli if I am using. I then continue to fry it until the oils from it start to release and you can really smell the paprika. One of my favourite ways to eat chorizo, which also happens to probably be the most healthy as it requires no additional oil and some of the fat is strained off the meat, is to very thinly slice it in to rounds and dry fry it on its own until the oils are released and they go crispy. Then remove from the pan using a slotted spoon, leaving the oil behind, drain on some kitchen roll to absorb any excess grease and then scatter over a salad. It adds great texture and tastes devine. Try my chorizo, pear and beetroot salad if you like the sound of this.

As you only tend to eat chorizo in small amounts, meals that include it tend to be lower in protein. If you want to still have a high protein meal, then a delicious way to do this is to pair it with lentils or beans. A really good way of doing this is in my chorizo, bean and avocado rice bowl. One of my other favourite recipe suggestions for chorizo is to make it in to a chilli, which I haven’t got round to writing up the recipe for yet, but i will soon.

Are you like me and love chorizo? Or do you find the flavour too strong? For me it is definitely one of my comfort foods that I go to whenever I come home from a race or training camp that hasn’t quite gone to plan and I need cheering up from. It makes me smile, it makes me happy, and that is why I eat it, even though I know it is not the healthiest of choices.