Ingredient of the Week: Egg 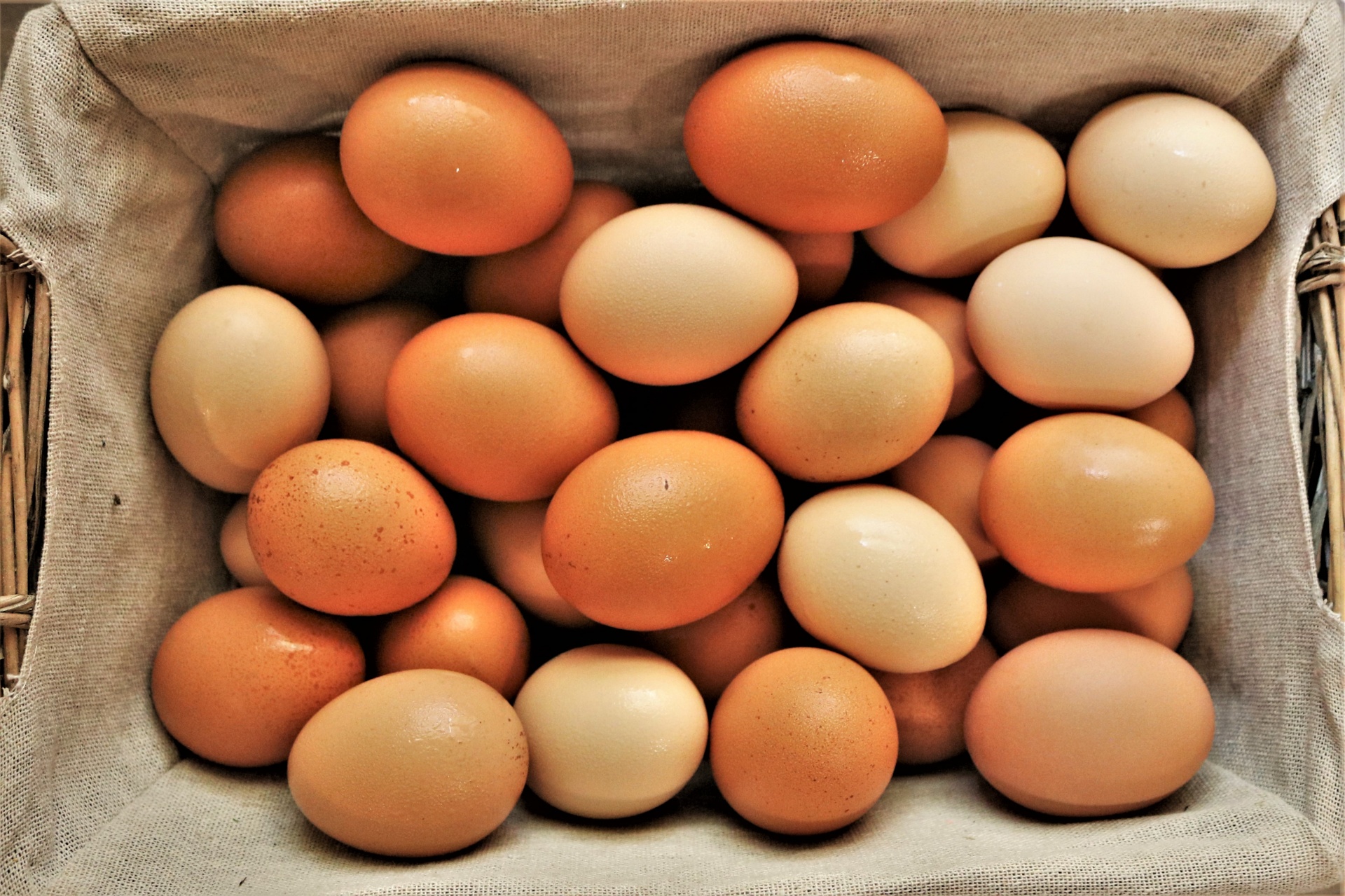 As a child I adored egg, preferably scrambled or fried. For some reason when growing up I claimed I didn’t like pasta and so whenever Mum made pasta bolognese for tea, I would have “Chucky Egg” instead. Basically mashed up boiled egg with butter and bread. For a while I would never eat a hard boiled yolk, making Mum pick them out if we had them as part of a salad, but I didn’t like a runny yolk in a fried egg, it needed to be hard. Its funny how you can be so picky for no reason with food when you are small. Scrambled egg is one of the first things I learned to make myself in the microwave. I’ve never attempted to do it on the hob, even though I know it probably is actually nicer, but Mum put me off by saying it makes too much of a mess. Scrambled egg is one of my safe foods that makes me feel happy and reminds me of home. It is what Mum would make me when I wasn’t feeling very well and so eating it always makes me feel cared for. Funnily enough, its also what we feed the dogs when they are under the weather as well.

As a teenager, for some reason I completely went off eggs. I literally couldn’t stomach them, but I have no clue why. I only started eating them again in desperation, to get more protein in to my diet at a hotel we were staying in for the Track World Championships in 2011. The food was so limited and appalling that I was forced in to eating them if I wanted any protein at all in my meal. Fortunately these sort of situations don’t happen any more as we are far better supported as a squad nutrition wise, but on this camp it was particularly bad. Very surprising as we were in Italy, but the chef had a very strange idea as to what food was appropriate for athletes and protein didn’t seem to feature, nor vegetables.

Eggs are incredibly versatile and nutritious. The majority of eggs consumed are from hens, however goose, duck and quail are other popular options. They consist of a more liquid egg white, where the majority of protein can be found and a smaller, yellow yolk containing higher levels of fat and good cholesterol. They can be separated from each other and many recipes call for this. However, this is a skill I have not mastered and so I have to avoid these. When whisked the whites hold a lot of air and so are used for aerating things like meringues or mousses. The yolks are used as an emulsifier in sauces such as hollandaise or mayonaise.

Eggs are a nutritious power house! They not only contain good levels of protein and healthy fat, but also a massive 18 different vitamins and minerals that the body requires to stay fit and healthy. There is a common misconception that eggs are bad for us because they contain cholesterol, which can lead to high blood pressure and heart disease. However, it is not the cholesterol found in eggs that cause this, but the type formed from eating high levels of saturated fat that result in this, so don’t let this discourage you from eating them. There is around 7g of protein in one medium-large egg, making them one of the highest non-meat sources of protein. They are also a complete protein as they contain all 9 of the essential amino acids needed to build new proteins. I explain a little more on this in my post about quinoa.

Eggs are one of the few food sources of vitamin D, which is needed to build healthy, strong bones and muscles. We mainly get it from exposure to sunlight, but this can be difficult during winter and in countries where the sunlight isn’t strong enough. In Britain we can only produce vitamin D from sunlight between the months of April and October and the hours of 11 am and 3 pm. Our skin needs to be directly exposed to it for the process to occur. Therefore, it is important to include foods that contain this vitamin in our diet. Other sources include mushrooms, salmon, tinned tuna and butter or cereal that has been fortified with it.

Other important nutrients in eggs include choline, lutein and zeaxanthin, vitamin A, follate, selenium, and vitamins B2, B5, B6, B12, just to name a few. Choline is neither a vitamin nor a mineral, but is still an essential nutrient needed for the healthy functioning of both the liver and brain, as well as muscle movement, nerve function and metabolism. Our liver can produce a little but not enough for our body to survive and so we need to get more from our diet. Egg yolk in particular is one of the best sources, along with beef or chicken liver, salmon or cod, cauliflower and broccoli. Unfortunately we tend to struggle to achieve an adequate level of choline in our diet and so it is important to try and increase our intake.

I speak more about lutein and zeaxanthin in my posts about butternut squash and green beans, but essentially they help to look after your eyes in to old age and reduce the risk of developing macular degeneration. This is one of the major causes of sight loss and so if we can avoid it, then all the better.

Firstly check the egg shell. Check that the shell is completely intact and there is no damage. I do this by feeling. Sometimes there are little bumps or scratches that you can feel which are fine. Never use an egg if the shell has been previously damaged. To crack an egg shell open I simply tap the middle of it against the lip of a bowl or cup. You can hear when it cracks. I then insert my thumbs inside the crack and pull apart, letting the contents drop in to the bowl. I have to take extra care that the egg shell doesn’t break, as it is a lot harder to remove shell from the bowl when you can’t see without feeling around for it and I don’t want to have to put my hands in to the mixture. I admit, on occasion we do end up with a slither of shell in our scrambled egg, it adds an extra crunch. Some people use a knife to break the shell of an egg, but I don’t trust myself to do this. If you are nervous of breaking an egg shell, then I recommend you stick to boiled eggs, as you boil them in there shells.

Eggs can be boiled, fried, scrambled, baked or poached. They are delicious on their own for breakfast, brunch, lunch or dinner. They can also be used to bind other things together, like in a frittata or an omelette. They are used to hold so much together in baking, an essential ingredient for pancakes, cakes and batter. There are so many food products that contain egg. Very annoying if you are allergic. Having an egg allergy is more common than you think and can be extremely restricting. Fortunately the growing vegan trend has improved options for people with egg allergies. Some common replacements for eggs in baking include, aquafava, the liquid that chickpeas are stored in inside a tin, white wine vinegar and bicarbonate of soda, yogurt or butter milk, and even mashed banana.

Looking for some inspiration on how to include eggs more in your diet? Then try this tasty and nutritious salami and avocado frittata, or this harissa spiced aubergine and eggs. This smoked salmon and eggs on potato cakes makes a filling lunch or brunch, while this egg and bacon brunch salad is a different way of getting plenty of protein in to your body. Want to try something a little different? Then try this hoisin cod with noodle omlette.

Next time you eat an egg, take the time to appreciate just how nutritious it is for your body. However, it is important to check the quality of egg. Try to always buy organic or free range eggs, as the nutrient content is better. Furthermore, make sure the eggs come with the Lion quality stamp, as this means they have been laid by chickens vaccinated against salmonella. It goes without saying, but never eat a bad egg. If one has gone off you can easily tell, as when you crack the shell it smells really bad. Another way to test whether an egg has gone off or not is to put it in a glass of water. If it is bad it will float, if it sinks, it is fresh and if it hovers suspended in the water, then it is still safe to eat but not as fresh. For more information on egg health and safety visit https://www.egginfo.co.uk