Making a Cup of Tea 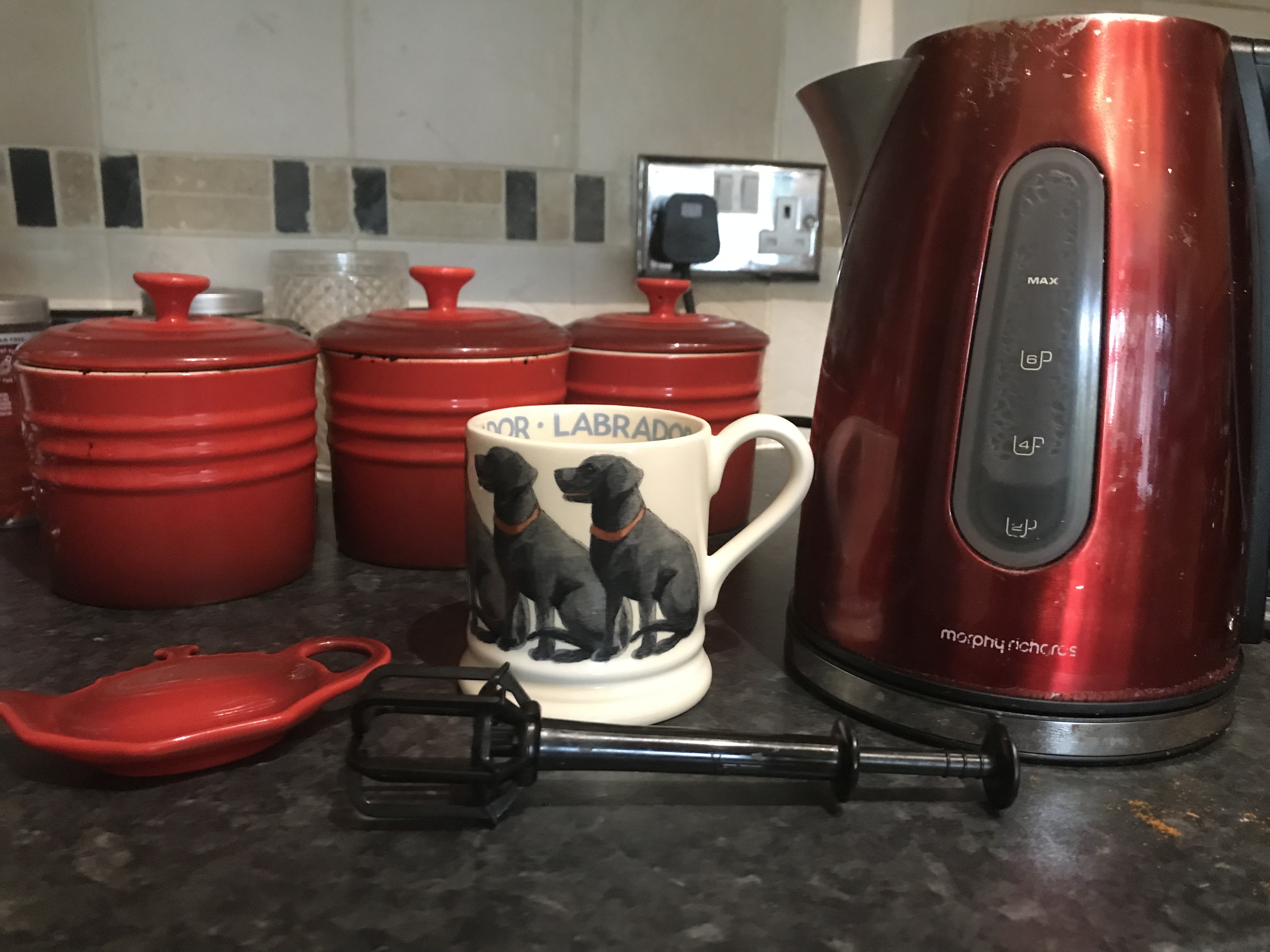 One of the first things I remember getting taught to do in the kitchen was to safely make a cup of tea. Now I know this seems a very simple task, but have you ever tried doing it with your eyes closed? How do you know where the cup is that you are pouring in to? How do you know when the cup is full? How do you know how much space to leave for milk? And most importantly, how do you avoid burning yourself with scalding hot water? It suddenly seems a whole lot more complicated, but don’t worry, I will try and explain in this week’s post.

The obvious place to start is by boiling the kettle. But even with that there are some considerations to make. I am very particular about what type of kettle I prefer. I like a jug style kettle with a handle down the side. I find it much easier to pour from and also safer than the style of kettle with a handle over the top. This is mainly to do with the fact that steam rises, so if I’m reaching to take hold of the kettle, if I’m going over the top of it i’m more likely to scald myself than if I’m reaching round the side. A jug kettle also seems to be more controllable when pouring as it feels more balanced in my hand. You can hear when a kettle is boiled by the fact it stops making a noise and clicks off. You can also sometimes hear the water bubbling inside the kettle so you can tell when it is about to happen.

It is also important to consider the cup you are using for making your cup of tea. Cups that have a smooth flat sturdy base are best, not the more rounded style as they are easy to tip over when you are resting against it or feeling around for it.  When I was first taught to make tea I would pour the milk in to the cup first. I know this is frowned upon by some tea connoisseurs but this answers the question to how much space to leave for milk, it has already been added.

The tea bag then goes in the cup and I make sure it is lying flat on the bottom.  Once the kettle is boiled I rest the spout of it on to the lip of the cup. This avoids missing when pouring so limiting the risk of spilling boiling water all over the side, which could then drip on to me. I have the kettle in my right hand as I am right-handed and I hold the cup in my left to stabilise it and also ensure that the kettle spout stays in contact with the cup rim.

The next bit is the controversial bit. When I was taught, I was shown to use a special piece of equipment called a liquid level indicator, which is hooked over the side of the cup and bleeps when it senses the liquid has reached that level. There was an intermittent beep when you were close to the top and a constant beep when you had reached it. You can still buy them from the RNIB here.

They are really good for when you are just learning to deal with sight loss or lacking in a little confidence. However, if you make tea in different environments, unless you are very organised, you won’t always have access to one and so I quickly learned to use something that I will always have with me….my finger.

Yes this does mean I deliberately stick my finger in a cup and hold it there until boiling water touches it but I have done it for so many years now that it doesn’t really hurt anymore. There is the potential for it to go very wrong if I am not concentrating, which means I try to avoid multitasking while making a cup of tea by not holding a conversation at the same time, but I find using my finger generally simplifies the process. If I don’t react quick enough then I might spill a little, but generally your reaction to being touched by something hot is to pull away, which stops me from continuing to pour. It does sometimes mean that in our house you do get very full cups of tea but there is nothing more disappointing in life than only half a cup of tea.

Quite often I have had people question me about using my finger but my touch is the sighted persons vision. It is the first sense I go to and the one i rely on most. All my family do the same, and to be honest most blind people that I have spoken to do something similar. I’ve even had people say that they hate watching me make a cup of tea or that they just can’t watch, but it works for me so that is the important thing.

Removing the teabag from the cup is the next stage. I was taught and can do it simply with a teaspoon but it is a bit tricky. I have to fish around in the hope that I get it on my spoon and then keep my fingers crossed that it is balanced enough to stay on the spoon when I pull it out the cup. So many times do I not quite get it right and the teabag falls back in the cup. I’ve found a really helpful tool to help me with this issue. It is called a tea tool and you can buy it from Lakeland here.

Simply put it in your mug with the prongs open so that the teabag fits inside it. Pull the plunger to grab and squeeze the teabag, then remove it from your cup without dripping any tea on the side or if you are like me, burning your fingers. It’s definitely helped me to make a cup of tea quicker and easier, and with less pain. Quite often in the past I would get fed up of fishing around aimlessly with my spoon for the teabag and just reach in to grab it, burning my fingers in the process. Now, I don’t.

If you are like me and tend to drink herbal tea more these days than your standard breakfast or black tea, then the process of making it is even more simplified. You don’t have to add milk so that step is taken out of the equation. I believe most herbal tea tastes nicer if you leave the teabag in, so another complication removed. The only exception for this is if it’s a white tea which needs to be removed, but I have a handy tool for that.

Making a cup of tea is something us British people take for granted. It is the answer to everything. When you get home you have a cup of tea to relax, when you get up in the morning you have a cup of tea, when you meet friends you chat over a cup of tea, when someone is sad you cheer them up with a cup of tea. Drinking tea has the power to make you feel safe, happy and relaxed and so why should someone without sight miss out on performing this simple task. Yes it might take a little longer to complete than someone with sight, yes there might be a slightly higher risk to hurting yourself but life is like that when you can’t see and you can’t afford to let blindness stop you or get in your way.

Living with sight loss can be very daunting to the newly diagnosed but there are always workarounds. If you or someone you know is going through losing their sight or even if you just have some questions, then please don’t hesitate to get in touch as I am always happy to help.

Thanks for reading and speak soon

Filed Under: In The Kitchen
Grilling
Learning to Use a Mandoline

1 thought on “Making a Cup of Tea”