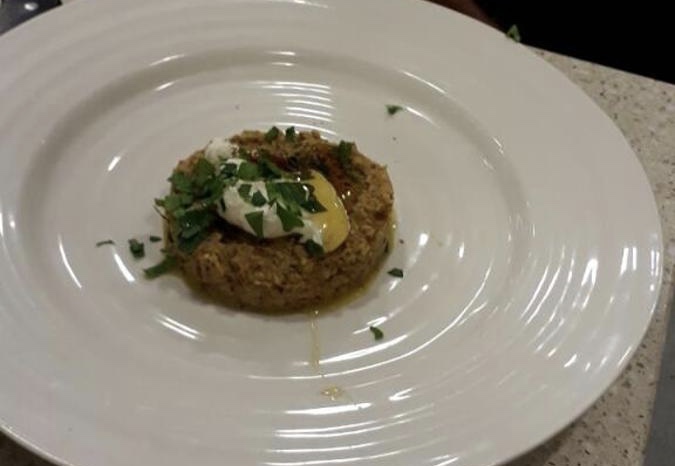 The other week I finally got round to using up the rest of my The Cheshire Cookery School vouchers Neil got me for Christmas by going along to a Middle Eastern cookery class. I was really excited for this one after having such a positive experience when I went on my bread baking course. Thankfully, I wasn’t disappointed in the slightest! It ended up being a very enjoyable way to spend a Wednesday evening.

As this was an evening course rather than a full day, it was much shorter and we didn’t quite do so much. However, my concern was that with there being less time, would it be more rushed? But no, not at all, the class was conducted at a really easy pace for me to keep up with. The chef leading the lesson was different to the bread course. He was just as good, if slightly more of a character. He was really good with me, coming over often to check I knew what I was doing, if he could help at all, and very keen to learn how best to support me.

This time Chris, my Manchester mum, the lady who looks after my dogs whenever I go away and can’t take them, and also looks after me regularly, came along to this one with me. We got there around 6.30pm and met the other participants. It was a similar sized group to the bread baking course, around 12 people. We had a quick chat while having a hot drink, where we met our chef, Rob, and he briefly outlined what to expect from the evening. Then it was time to put on our aprons and head to the kitchen to start.

Firstly Rob got us to gather round the front to demonstrate how to marinade the chicken that we would be using for our first dish of the night, a chicken tagine. He then showed us how to make the dish, while also giving us a couple of really handy tips and tricks. The best being how to make a lid for a pan that is to go in the oven out of baking paper.  As the chicken needs to be marinaded for a while, this step had already been done for us, so we were good to get cracking with the cooking.

The first thing we needed to do was get the frying pan on and hot before frying the chicken skin side down for several minutes to colour it. Unfortunately all the cookers at the cookery school are induction hobs, something both myself and Chris struggled to get to grips with. Click the links to find out why I prefer cooking on gas. We did manage to get going eventually and while the chicken was colouring, we gathered our other ingredients. This included an onion, which we needed to dice ourselves and some already prepared mixed vegetables, pepper, aubergine and sweet potato. Once the chicken skin was nicely browned and starting to feel crisp to the touch, we flipped it over and added our vegetables to the pan. Leaving them to soften for a few minutes before pouring in some water, seasoning, covering with our make shift lids and transferring to the oven. They were already starting to smell delicious as the chicken had been marinaded in lots of spices including turmeric, garlic, black pepper and preserved lemon.

Preserved lemon was a new ingredient to me. I had never seen one before, let alone tasted it. Fortunately there were plenty of them around for me to feel, and taste, especially as we were to add more of the stuff to the finished dish as a garnish. Preserved lemons are smaller than normal lemons, you prepare them in a similar way but they are entirely edible. The inside is very salty and the skin almost tastes soapy. It is a very acquired taste that I can’t quite decide if I like or not. Rob was really good at showing me how to remove the skin from it with a sharp knife, although I’m not too sure Chris enjoyed watching that part. The knives in the cookery school are extremely sharp so I made sure I used them with caution. I share some advice in a previous post on using sharp knives when you can’t see.

While the tagine was in the oven, it was time to get our second dish going. This was a roasted cauliflower puree seasoned with labna, a strained yogurt, and sumac, a type of herb. Again Rob demonstrated how to make it first, before it was our turn. Simply starting the cauliflower florets off in a frying pan before transferring them to the oven to roast. He then guided us through the next steps of our tagine and demonstrated what we needed to do to make pitta bread to serve with our meal.

I had already learned to make pitta breads on my last course, so I was fairly comfortable with this process, although Rob was keen to help show me how to roll the dough in to balls properly, a skill I am yet to master. While we were making our pittas, our tagine’s were out of the oven and back on the hob reducing off any excess liquid, and our cauliflower florets were happily roasting in the oven. Once reduced, all we needed to do with our tagine was to add in some chopped up olives, thinly sliced preserved lemon and some coriander and parsley, before serving it with our freshly griddled pitta. By this time we were all really very hungry and keen to sit down and eat, which we did while the chef and his helpers cleaned up our mess and got ready to demonstrate how to finish off our cauliflower puree.

I was starving and demolished my tagine sharpish! It helped that it also tasted really good! I love olives but don’t get to eat them too often as Neil hates them. One of the few foods we disagree on. We had had a little trouble with our cooker and so the griddle pan for our pitta wasn’t really hot enough which meant they weren’t quite cooked enough, but they still tasted good. The chicken had so much flavour from the marinade, definitely a recipe I would like to make again, or put my own interpretation on.

Once our tagine’s had been polished off, it was back to the kitchen again to finish off the cauliflower. This was really simple! All we needed to do was blend it with some lemon juice and olive oil until smooth, before plating it up inside a cooking ring to form a circle. We then topped it with a spoonful of the labna, a drizzle of honey and sprinkle of sumac and parsley. I don’t think I’ve ever plated up something with so much care, if I had been at home it would have gone straight in a bowl and everything else just dolloped on top. We had some pitta left, which we sliced up and used to scoop up the puree. It tasted really good. This was my favourite dish of the night and something I will definitely look to make again and again.

All in all it was a really interesting evening. I learned a fair bit and I got to taste lots of new flavours. This was what i enjoyed most about the experience, learning how to cook with new ingredients. I also really enjoyed working with Rob. He was lovely and really interested in what I do and my blog. It was really nice to get some feedback from someone in the food industry. I admit, sometimes it did feel a little more rushed than with the bread making course, but then that is to be expected in a shorter class, however thankfully it didn’t feel anywhere near as rushed or un-organised as the Indian cookery course I did last month. I walked away excited about putting my new found skills in to action at home and considering what course I should try and do there next. After all its nearly Christmas again and so Neil needs more ideas of what to get me. Hint Hint!

I really do strongly recommend the Cheshire Cookery School and if you are interested or have any questions then please do get in touch.

Filed Under: In The Kitchen
Making Soup
Cooking in an Unfamiliar Environment