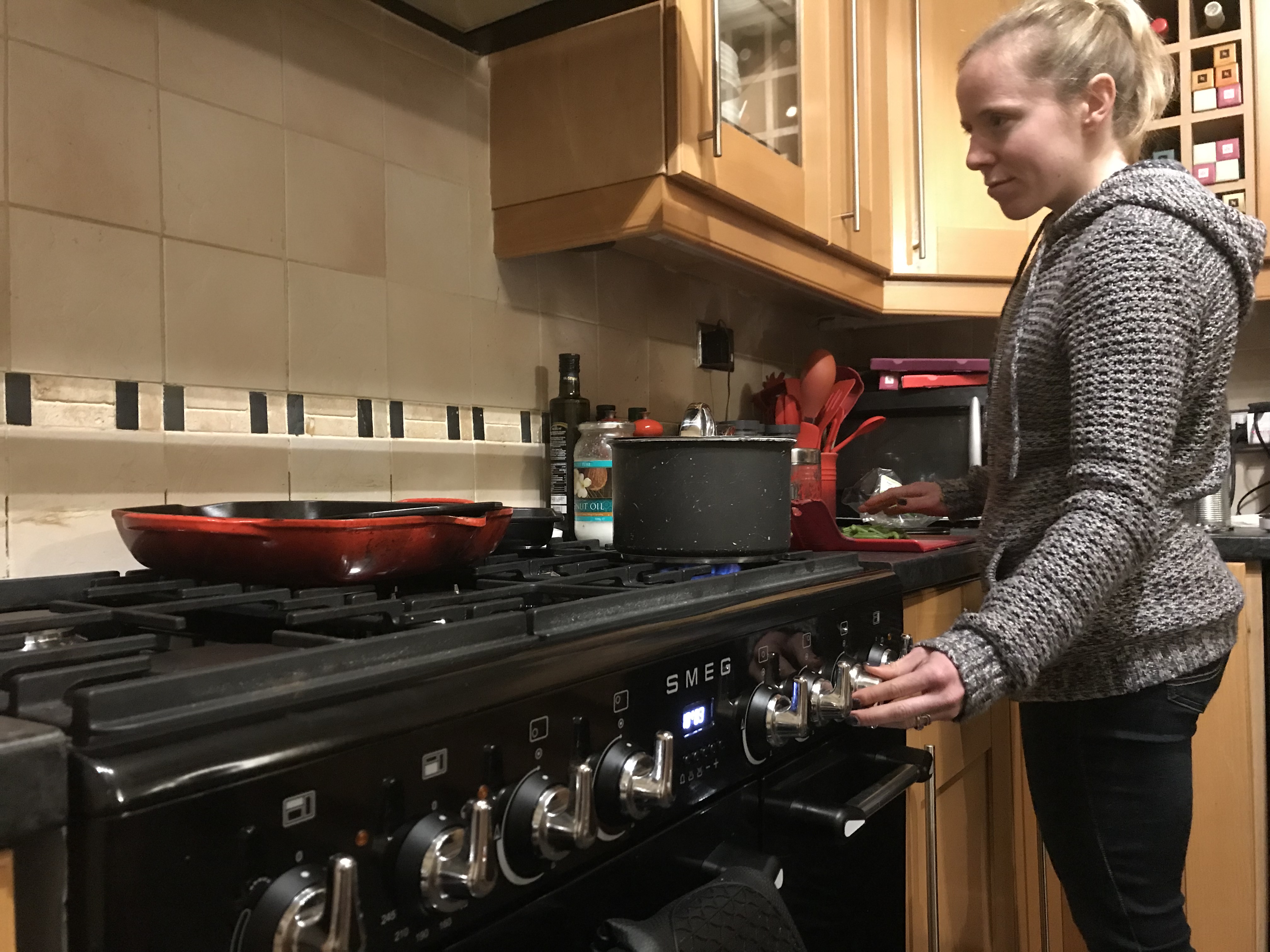 I’m writing this post for a couple of reasons really. Firstly to highlight and share some of the struggles I face in the kitchen when not being able to see, and secondly to see if anyone has any tips or advice on how to overcome these struggles. Some of the things I struggle with are not particularly because I can’t see, more that I’ve just never learnt how to do it and am sure if I had someone willing to show me could learn. Maybe there is someone out there who would like to come and teach me?

One of the most annoying things that I can’t currently do is separate an egg. So many recipes that I like the look of require just egg whites, just yolks or sometimes just the eggs to be separated, and its just something I don’t quite know how to do. It is one of my most frustrating limitations, but I just don’t know where to start.

Another of my struggles is flipping or turning small or thin items in a frying pan or on a grill. Its hard to do this without feeling what you are doing, which inevitably means you then burn your fingers. Bigger, more solid  items like fish fillets, large vegetables, burgers or other pieces of meat are fine as they are more easy to control with a fish slice or pallet knife, but its the smaller, more delicate ingredients like scallops, bacon, eggs and pancakes that are tricky.

Heating things to exact temperatures. I don’t have a thermometer that I can use for a start, and listening for tell tale sounds like bubbling generally means I’ve gone too far. This is something I particularly struggle with when heating milk, as if it boils over it makes an awful mess. Making caramel or anything like that is currently a no go zone, which possibly is a good thing.

I definitely find most baking related tasks more tricky, but I think this is more because I’m scared of getting things wrong, rather than not actually being able to do it. In cooking you can get away with mistakes, but in baking you can’t hide. This is one I think I just need to build more confidence around. One of the frustrations related to this is making things look good and decoration. This generally doesn’t really bother me, but sometimes I think it would be nice to be able to make more of an effort.

Frying anything in a lot of oil. This isn’t really a bad thing as this isn’t the healthiest way of cooking, but sometimes it would be nice to be able to make things like crispy falafel, fish cakes, tempura battered or crumb coated foods. Unfortunately though, its just too dangerous, as it involves working with a lot of things that are very hot and could very easily go wrong. Its about knowing and understanding your limitations with this one, but that doesn’t mean to say it doesn’t get frustrating. Most of the time though this one is easy to work around as it is healthier and more simple to just bake in the oven, just not quite so tasty.

I’ve already spoken about my restriction with filleting, skinning and deboning fish in my post on the subject, but this is something else I would love to be able to do. Fortunately I’ve found a good workaround for this one and now get a regular selection of different fresh fish that is already prepared for me from a company called FishBox, so it isn’t too much of a restriction, but sometimes it would be nice to buy a fresh sea bass or mackerel from the fish counter.

Removing zest from citrus fruit is another struggle of mine. You are only meant to take the top layer off and not the layer beneath, but I’m not really sure how deep to go and once removed, it again can end up being very fine, making it hard to feel and handle.

Using vegetables that have different coloured parts and following recipes that require only one part of it. An example of this is only using the white of leeks and separating the green and white from spring onions. I’m really not sure which is which and how to tell them apart.

One other frustrating struggle is measuring exact quantities of liquid, especially small amounts. I do have a really good set of magnetic measuring spoons, but its so difficult to pour, feel and stop in time without spilling any and getting it right. Its either too much and I end up spilling some, or not quite enough. I can never seem to just get it right.

One final struggle I have is cooking with inedible ingredients that are just used for flavouring and then removed before eating. Examples of this include bay leaves, whole cloves or cardamom pods. I can’t see where they are in the pan to remove them and the food is too hot to feel around for them, also I don’t really want to have to feel around in my dinner with my hands before I eat it, and definitely not in someone elses. I do have a special spoon type implement that you can put things in for flavouring and then leave in the pan and easily remove it at the end, but it has too long a handle to fit in the pan when the lid is on. Most recipes that require the use of these sorts of ingredients also require the lid to be placed on the pan. I need to find something like this Joseph Joseph spoon, but without the handle. A bit like a silicon teabag for fresh tea leaves but bigger. Has anyone seen anything like this?

So there’s an example of some of the struggles faced by someone who can’t see, but that also wants to be creative in the kitchen. Generally these frustrations don’t prevent me from cooking or enjoying what I do, but sometimes it would be nice to not have to come up with your own methods or workarounds. If you can think of any ways to help make any of these struggles easier or have your own that you could do with some help with, then please share in the comments below.

Filed Under: In The Kitchen
Classic Cooking Mishaps
Getting To Grips With My Vitamix

15 thoughts on “My Kitchen Struggles”