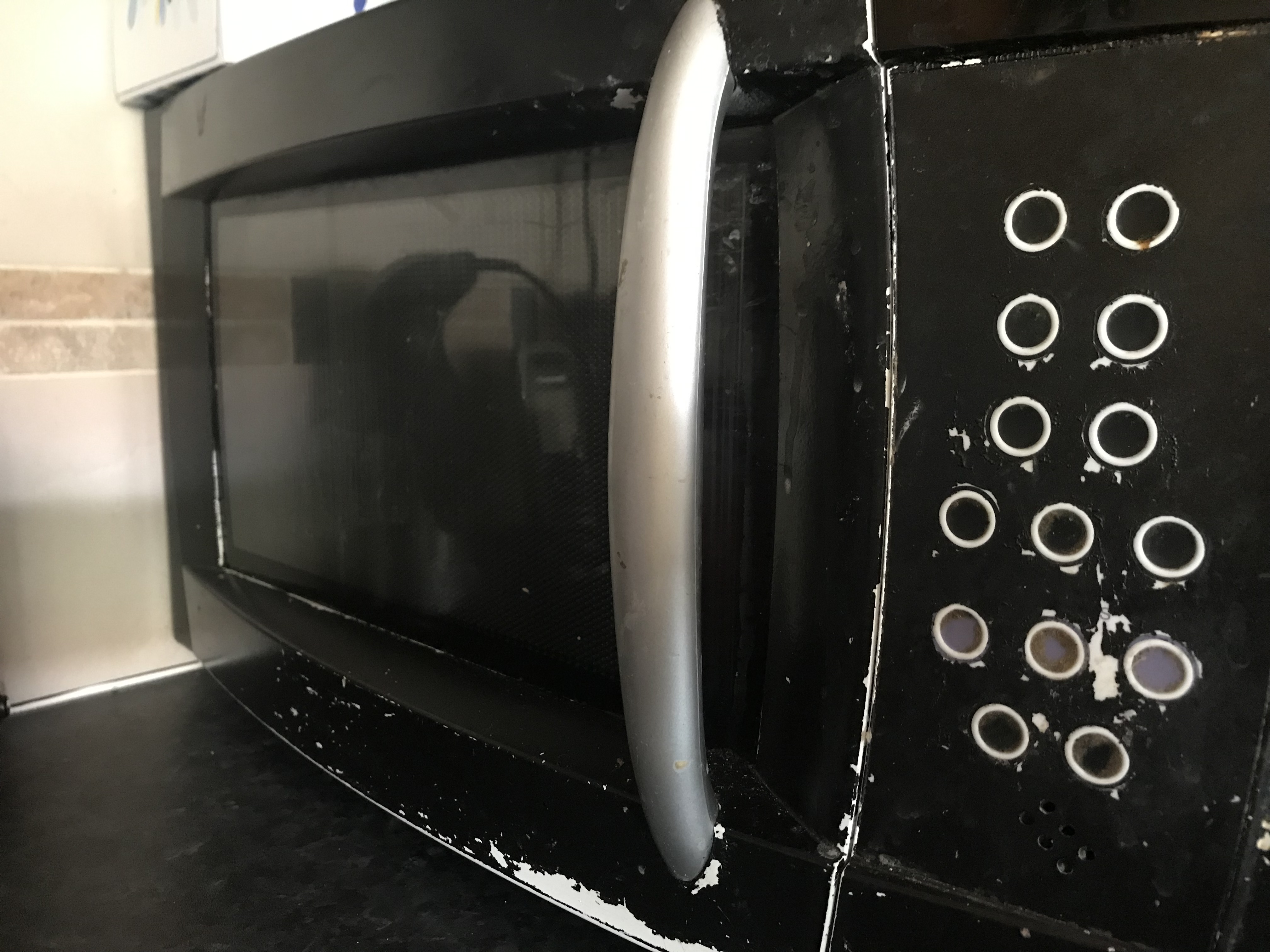 One of the few pieces of equipment that I have in my kitchen specifically designed for blind people to use is my talking microwave. Microwaves can be very tricky to use if you can’t see, as they involve altering settings and times. The more modern versions are usually touch screen as well, which is a definite no go area for blind people, unless they have a specific voice over adaptation setting, like my phone. If they have an audible sound when you programme them it helps, but it still requires the blind person to operate them purely on memory and so not the easiest.

The main problem with using equipment specifically designed for blind people is the cost. To buy a talking microwave it costs well over £200 and even then it is a pretty basic piece of equipment, barring the voice software. They are large and chunky and take up a lot of space in the kitchen, and they only come in white, so your options are very limited. We actually got Neil’s Dad to spray paint my talking microwave black so that it matched my kitchen, but that meant that no-one else could use it as it covered up the writing on the buttons. Perfect for me, not so for Neil.

I was very lucky when I got my talking microwave, as someone gifted it to me while I was at university. A lecturer had one not being used as it had been provided for her visually impaired farther and he no longer used it, so she passed it on to me. During my university years this was really helpful, as I could not use the microwaves in the student accommodation at all and as a student, a microwave came in handy.

12 years later and I still have the same talking microwave, so I’ve definitely got my use out of it. However, it really is starting to show its age and I’m getting a bit fed up with the amount of space it takes up. I would like to get a new one but I’m not sure I want to spend that much money on a piece of kitchen equipment that I don’t actually particularly like or fits in my kitchen.

I do however use my microwave regularly. I use it to quickly and easily make porridge in the mornings and to scramble eggs as it is easier than making them on the hob. I use it to reheat meals I have made in advance, warm through cooked lentils or beans and cook or defrost frozen vegetables. You can also use it to cook rice or pasta if you like and even fish. There is so much you can cook or prepare with a microwave if you are short on time and so it is a useful kitchen tool to have.

Talking microwaves are available from the RNIB and are made by a company called Cobolt Systems, which design talking equipment for blind people to use. It works by speaking in a clear and easy to understand voice whenever you press any of the buttons. The buttons are also very tactile and so easy to find and operate. If only it wasn’t so big, white and ugly then it would be perfect.

Having something that talks definitely makes things a lot easier in the kitchen. In Weighing and Measuring I explain how helpful having kitchen scales that can talk can be. Its just frustrating that there’s A) not more equipment that talks that I can use and B) that the equipment that does talk is so expensive and uninspiring that I don’t particularly want to use it. I ideally would like a microwave that is smaller, so takes up less room on the side, is black so that it matches the rest of my kitchen, and is tactile enough, with some audible feedback so that I can use it. Even though I can’t see, I still like my kitchen to look good. Just because I can’t see it doesn’t mean I shouldn’t take pride in how it appears. The same goes for looks and appearance. Even though I can’t see how I look, I still like to wear nice clothes and take pride in my appearance and the same goes for my house and especially my kitchen.

The feature I use most regularly on my microwave is not actually the microwave, but the in built timer. I’m always using it to set my timers for cooking and if I got rid of it this would be the thing I would miss the most. I do have an Alexa in my kitchen, which I could quite easily use to set a timer and I’m sure I would quickly get in to the routine of doing this, but currently my go to is my microwave timer.

So I have a little bit of a dilemma really. Do I bite the bullet and go with the fully accessible, easy to use, big bulky, white microwave that I don’t like, to replace my old one. Or, do I spend some time looking round trying to find one that I like, that matches my kitchen, is tactile or audible enough that I can use it and isn’t so expensive? The problem with the second option is that this will take a lot of time as I will need to actually see the microwave before I buy it. I will need to feel and hear if I can control, and get someone to demonstrate how to use it so that I can get a good idea for whether it is accessible enough. This will mean I will have to probably go in to several kitchen appliance shops before I potentially find the right one and hope that I do in the end.

If anyone has a microwave that they think fits my requirements, then I would really appreciate a recommendation. Also, if anyone has any questions on how to use a talking microwave, then please do get in touch. I consider myself a bit of a pro at using one these days.

Filed Under: In The Kitchen
Knife Skills
Preparing Garlic