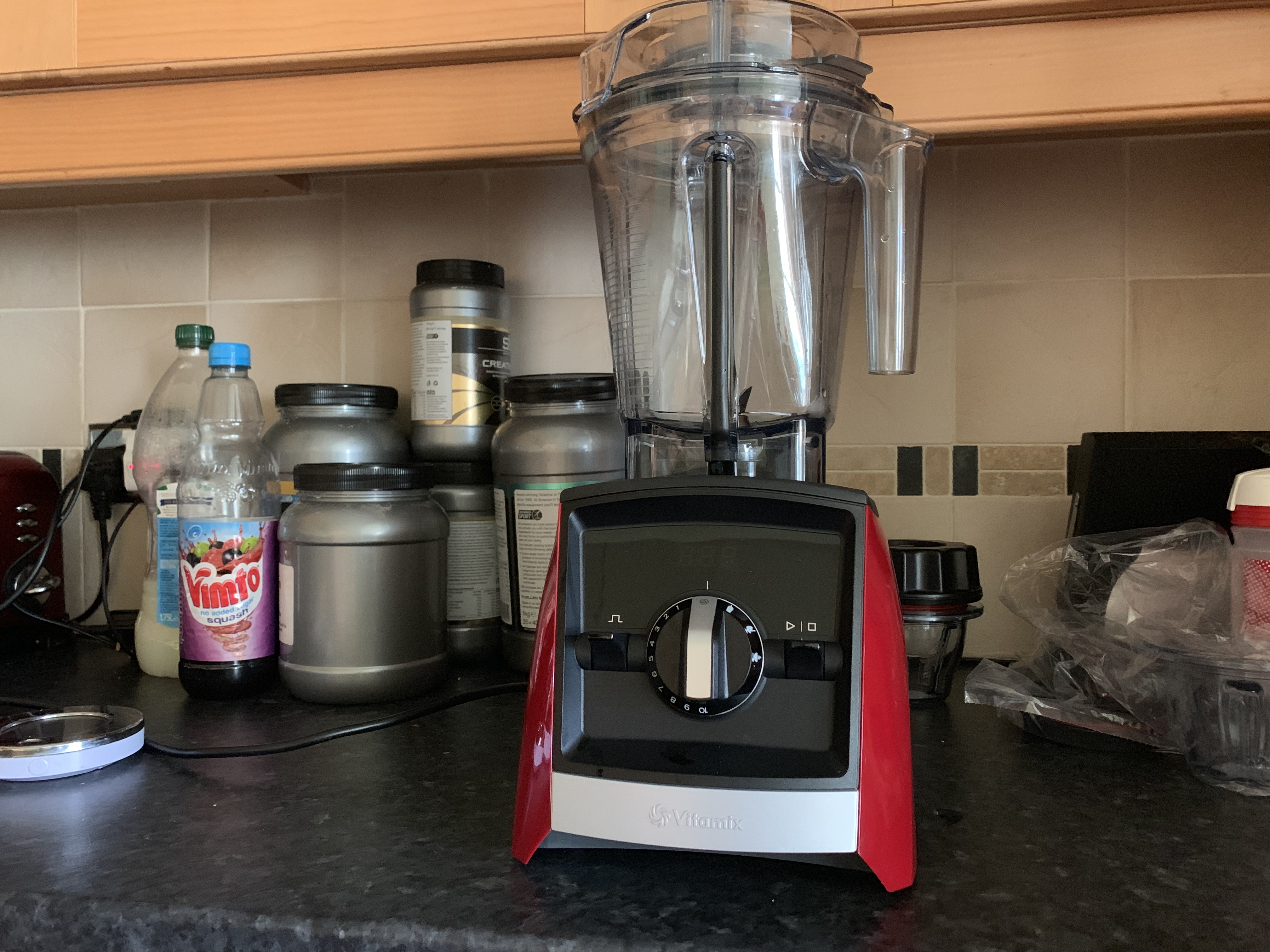 It seems that the older you get, the harder it becomes to think of present suggestions for other people to get you on your birthday. Each year I get older, I dread the task of having to think of new ideas and things I need. So inevitably last month, when both Neil and Mum approached me to ask the same question, my response was “I’ll have a think.” And then it occurred to me that this year there was something I really wanted…

Since going on my bread making course in June I have been inspired to be more creative in the kitchen. I would like to start pushing my boundaries and attempting to make new things. The problem is, I don’t have a food processor or mixer. I have a hand held blender, but it has its limitations and thats about it. So in order to help me to be more creative and make more from scratch, I could do with a new kitchen gadget.

For a long time, in secret, or maybe perhaps not quite secret, you will have to ask Neil that one, I have lusted after a Vitamix. It is a very fancy, high-end blender that can make smoothies in seconds, the speed of the blades can freeze and make ice-cream in a minute and the heat from the blades can blend and cook soup in just over 5 minutes. Not only this, the blender can also be used to mix batters, knead dough, make nut butters, salsas, sauces, you name it, it can probably make it. However this amazing machine also comes with a hefty price tag and in the past I’ve felt like I can not justify spending that much money on something I might not get much use out of, until now.

So full of my new enthusiasm for creating more of my food from scratch, I eagerly went back to my Mum and Neil and suggested that instead of them buying me presents, would they like to put some money towards helping me to buy a new food processor. Technically Vitamix is not a food processor, but initially, even though the Vitamix was what I was looking at, I still wasn’t convinced that this was actually what I wanted or the best for me.

There are so many different electrical kitchen gadgets available to help you prepare your food, that knowing where to start can be very overwhelming. I decided to do a bit of research to help me work out what it really was I was looking for and discovered that yes it was definitely more of a processor that I wanted. A mixer, like the Kitchen Aid one I really liked on my bread making course, is perfect for making cakes, doughs and batters, but this is all it does. It doesn’t chop, grate, blend or anything like that. A traditional blender purely blends or chops, it isn’t good for kneading dough or whisking cake batter. Depending on the brand of food processor, they can potentially do the majority of these things, if not all.

I eventually narrowed down my options to two machines, the Magimix food processor, which could also blend, or the Vitamix. Both seemed to do everything I wanted and both got good reviews. My biggest issue when looking at kitchen gadgets, especially electrical ones, is that can I still operate it without being able to see. Most equipment, especially these days, relies on you being able to read a screen to programme your settings. Some are even touch screen, which are a complete disaster for me. So in order to be sure that I could use either of these machines and to get a better look at them, I dragged Neil out to the John Lewis at the Trafford Centre to have a look around.

Thankfully, both the machines I had set my mind on were actually really easy to use. However, there were many others on display that were a complete no go. Often dials that you twist to select a setting don’t click, or beep to identify if it has changed. Also some just keep on turning and turning so you never know where the start or end is. Sometimes you can work round this yourself by placing tactile markings on the machine when you get it home, but why should you have to over complicate things when you are already paying so much money for it in the first place. Others have touch screens or just lots of buttons, making it too complicated. I wanted something really simple, with minimal buttons that were tactile and easy too use.

The Magimix fit this requirement as it only had 3 buttons, start, stop and pulse. Really very simple, but you weren’t able to alter the speed or do anything fancy with it. The Vitamix A2500i has two buttons, one for start-stop and one for pulse. It then has a dial with a raised line that angles to point to the top. If you turn it to the left it clicks three times for different settings and if you turn it to the right it is a scale of 1-10 for controlling the speed, giving you more control and options for what you can make. So long as I remember how many clicks for each setting and at what angle the dial needs to be at for each speed setting, then I am good to go.

The A2500i is the only model of the Vitamix that I can use. The top end model they do is programmable by a touch screen and the slightly cheaper model has a dial that keeps on turning with no obvious tactile marking to show where the arrow is. This means that both these machines are not so easy to use for someone with a visual impairment. I am just thankful that one of them is, as deep down from the start, it was one of them I wanted all along. I just didn’t want to set my mind on it just incase I couldn’t use it. I then would have been disappointed. The Magimix would have made a good machine too, but the child in me just loves the idea of being able to make ice-cream in 30 seconds and soup in six minutes, from the same machine. Yes I know I have expensive tastes.

So having decided that I will be able to use a Vitamix, we went ahead and bought one. I really look forward to seeing what new recipes I can come up with and will share them here as and when I do. If any of you have a Vitamix and could share any tips and tricks, then that would be much appreciated. I look forward to updating you on how I am getting on with it in the future.