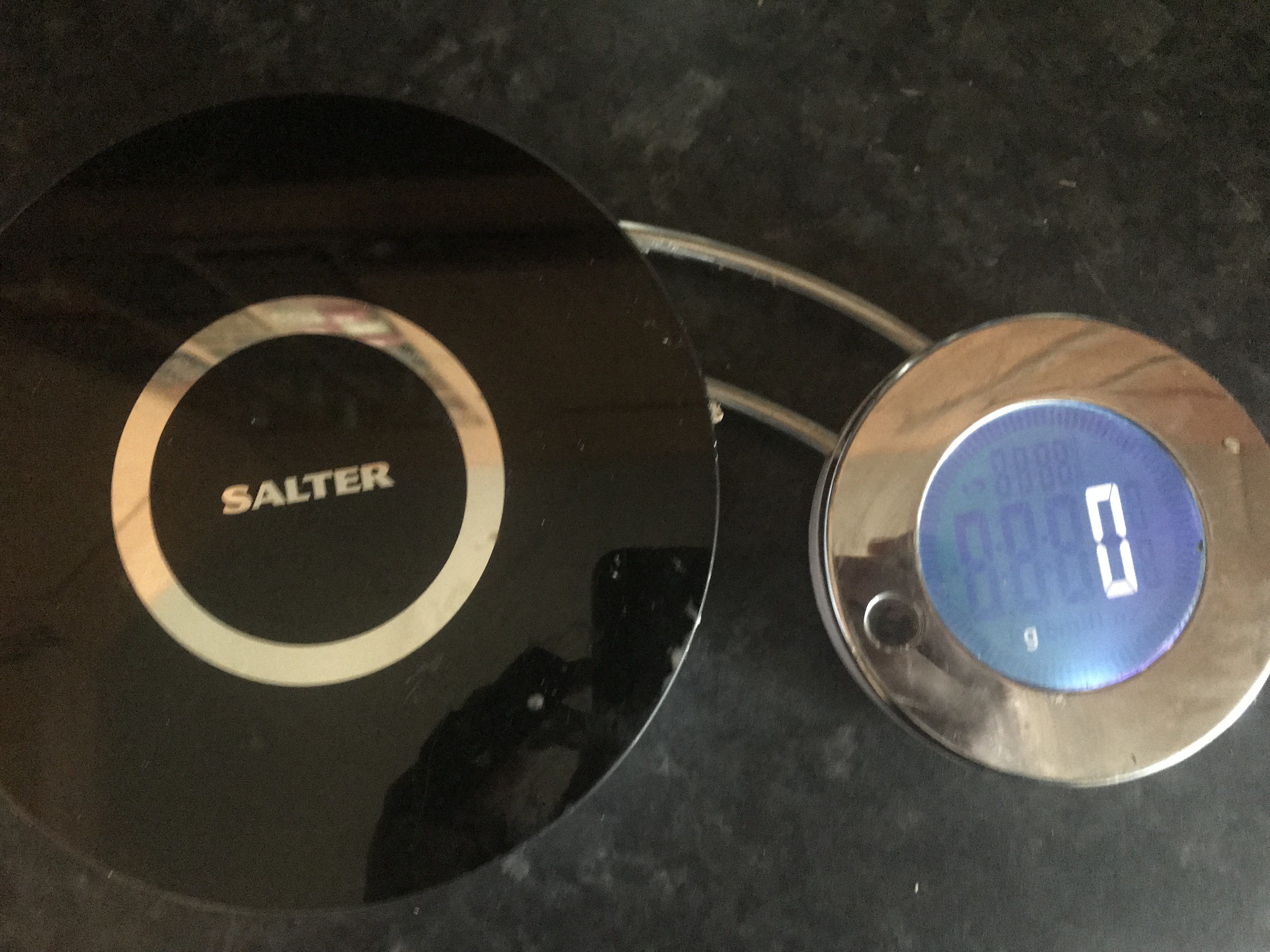 In Cooking Without Sight I briefly touch on how I both weigh and measure my ingredients when cooking. In this post I thought I would go in to a little more detail. Weighing ingredients these days is far easier than it used to be  if you have a set of talking scales. It does all the hard work for you. It does however mean that you have a very limited choice of kitchen scales to buy and until recently you could only get them through companies specifically focused on supplying equipment for visually impaired people like the RNIB or Cobalt Systems.

The set of kitchen scales I currently have however are a set designed by Salter which is a far more popular brand available on the high street and I was able to buy them on amazon. This is incredibly encouraging as it proves that more mainstream brands are recognising that sight loss is a common problem in the world we live in today and they need to be able to provide products that are accessible to all. As Salter is one of the leading brands for kitchen scales it also means that they are far more accurate and efficient, while also being sleeker, easier for both sighted and non-sighted people to use and most importantly far less expensive.

My first set of talking scales I bought from the RNIB, which is a charity that supports people living with sight loss. They do a fantastic job and have helped thousands of people live an almost normal life. Their products aren’t always the most aesthetically pleasing as they don’t need to be and they generally cost a lot more than on the high street, due to the special adaptations. Although I can not see, I still like to have and use things that are sleek and look good, so this was always a real frustration of mine and to have to pay far more money just for something that I can use by myself does annoy me.

The Salter target scales that I now use are far more compact. They are really easy to use and also match the colour scheme in my kitchen. They speak in a clear human voice that is easy to understand and they announce the precise weight, rather than with my last set which would only go in 5 gram increments. I very rarely need to be this accurate but it’s still a cool feature. They also weigh fluid as well as solids which is very handy for if I’m measuring liquid as well.

I remember as a very young child my Mum having a set of scales where she would have to balance what ever she was weighing with the weight that was placed on the other side. She would do all this through touch. It was impressive, but extremely time consuming and I’m glad I don’t have to do this. She now also uses the same talking scales as myself. In fact it was her who recommended them to me. Mum and I often have the same things in our kitchens as it is quite hard to find things that are accessible but cheap, so when we do we are quick to share it with one another.

Another piece of accessible equipment I remember my Mum using when growing up was a really cool measuring jug that had braille up the side. It again had been supplied by RNIB. For some reason it stopped being made and I’ve never been able to find one that is tactile enough for me to use. If i’m measuring liquid I tend to use my measuring cups if it is 250ml or less. I will also often just use a mug, especially for stock, as I know that my mugs are around 300ml. I have a measuring jug that is 500ml and one that is 1 litre. For anything in between its often just guess work. This is why cooking suits me so much better than baking. I can afford to be a little flexible with fluid content in sauces or meals, so long as I check my cooking as I go along. In baking its a lot more tricky.

There are some jugs available that have markings on that you can feel but the majority of them are not heat proof or microwave safe and so can not be used to make things like stock or measure boiling water. I do have a little measuring beaker that came with my soup maker that is tactile but it only measures up to 200ml so isn’t really big enough.

Although frustrating that there aren’t more options available to accurately measure liquid, it definitely isn’t an issue. As I have highlighted i’ve learned to adapt and use what I can to my advantage. I do however quite often get lazy and if Neil is around, just ask him to do it instead. I know this isn’t always an option, and not everyone has a Neil, but you can definitely still do it yourself, it just might take slightly longer.

Unfortunately after writing this blog I checked on google to provide a link to the Salter scales I use but they have been discontinued. This is a common issue for people who can’t see. We find great products that are accessible to us but then because the demand is not high enough they stop making them and we go back to square one. Hopefully my scales have a long life left in them but I’m sorry for not being able to help other people who might be in my position. Talking scales are definitely one of the adaptive pieces of equipment in my kitchen that I couldn’t live without.

I hope you have enjoyed reading this post and maybe if you have any equipment that would be useful for people who can’t see that is available for them to buy on the high street, then you can recommend it in the comments below.

Filed Under: In The Kitchen
Is it Safe to Eat?
Grilling